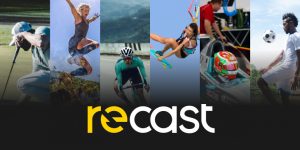 Recast, which raised US$8.2 million from the investment round round of investment, provides a platform that is designed to connect rights holders, fans and brands on a single OTT platform using a per view micro-transaction model.

Fans can watch sports content with no monthly fees and the ability to supplement their viewing by earning in-app credits called Cast Credits for sharing and watching branded content.

Recast has said it will now make its platform available in the US and Canada, Europe, Australia and New Zealand, the Middle East and North Africa as well as the UK, with other countries following shortly.

The company, whose platform is in beta trials, is working with partners including golf’s European Tour, Manchester City FC, Table Tennis England and Hibernian FC.

Recast has hired Rob Zeko, who was involved in the funding round as a consultant, as Chief Commercial Officer with responsibility for driving overall value creation via revenue generation, corporate development and overarching business strategy.

Andy Meikle, Recast’s CEO and Founder said: “I’m very excited with these major developments, particularly as we’re now solving two major issues.  Firstly, without any costs associated, rights holders will now be able to go direct-to-customer and monetise audiences in markets where they don’t have existing or complimentary commercial relations.  Secondly, fans in these regions will now benefit from getting flexible and affordable access to sport they otherwise may have been unable to watch and in some cases may have resorted to illegal streams.”

“As we ramp up our global expansion plans due to unprecedented demand, I am delighted to welcome someone of Rob’s calibre to the Recast management team,” said Mr Meikle. “Everyone should have the opportunity to digitally transform their organisation and I’m delighted that Rob is joining us at such a crucial stage of our life cycle to offer a monetisation solution for free.”

Zeko said: “Recast’s OTT micropayment model has come to market at a time when global sports organisations are facing numerous challenges with traditional distribution – expanding the business into new markets allows our partners to have full control over their rights and directly monetise their content. Rather than having to rely on traditional channels, who take the lion’s share of advertising revenue and don’t focus on giving value directly, content creators and rights holders will now have complete choice and control over their distribution model.”