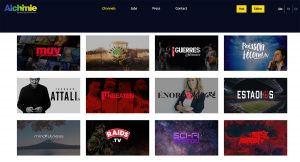 Aflam means movies or film in Arabic. Rotana offers five popular movie channels across the Middle East. The new SVOD offering will be distributed by Alchimie across its European SVOD network excluding France and will be available on digital platforms including the Alchimie owned UK TVPlayer for £4.99 per month.

AflamPlus TV will offer a regularly refreshed playlist of current and classic Arabic films across comedy, drama, romantic, and action genres. Films will be shown in their original language, selected rom a library of over 2,000 Arabic films.

“We’re delighted to join forces with Rotana to bring the best Arabian films to audiences across Europe. Together we’re able to offer a wealth of Middle Eastern movies on AflamPlus TV, providing Arabic films from every era and genre to appeal to every generation – whenever and wherever they want to watch them,” said Nicolas d’Hueppe, CEO and founder of Alchimie.

“Rotana Media Group is delighted to partner with Alchimie to create AflamPlus TV. Rotana is passionate about Arabic cinema, and our new on-demand channel enables us to introduce our incredible library of Arabic films, which is the largest in the world, to new European audiences,” said Michael Cairns, chief operating officer, Rotana Media Group.