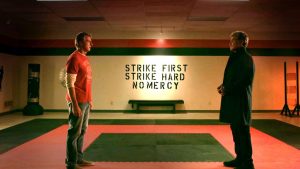 Karate Kid spin-off Cobra Kai, which Netflix acquired in June of last year, topped Parrot Analytics’ audience demand stats for the Netherlands for the week ending January 10, well ahead of second-placed The Mandalorian from Disney+.

Parrot Analytics measures ‘audience demand’ as a reflection of the desire, engagement and viewership of a show in a particular market, weighted by importance. 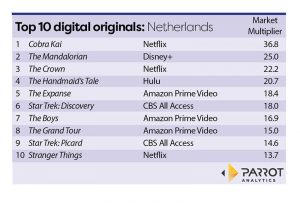 While Parrot’s listings have often been dominated by Netflix shows, the leading streamer only appears three times in the Dutch top 10, although CBS All Access’s Star Trek: Discovery, which is distributed by Netflix internationally, also appears at number six. (Star Trek: Picard, which is distributed by Amazon Prime Video, comes in at number nine.) The other Netflix shows are The Crown at number three and Stranger Things at number 10.

Amazon Prime Video originals make a relatively strong showing in the Dutch list, with The Expanse appearing at number five, The Boys at number seven and The Grand Tour at number eight.