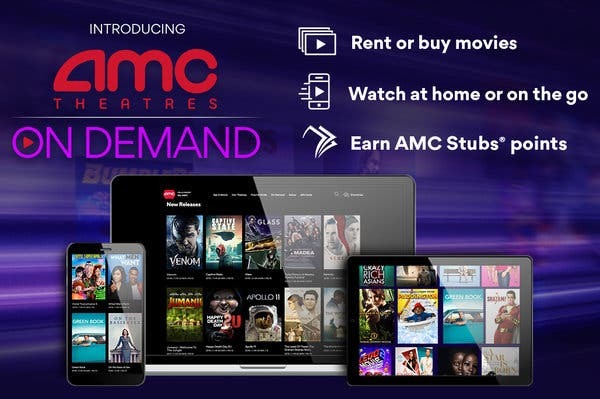 US cinema chain AMC Theatres is launching its own on-demand video service.

Functioning in a similar manner to Apple’s iTunes Store and Amazon Prime Video, the platform will allow users to rent or buy movies.

The service, called AMC Theatres on Demand, launches as an online store with approximately 2,000 films available. In contrast to the ongoing trend in home media, AMC Theatres on Demand will not have a subscription cost attached, and will solely be rental and purchase-based. Rentals will cost between US$3-5.99 while purchases will range from US$9.99-19.99.

Despite many of them launching launching their own platforms in the imminent future, the likes of Disney, Warner Bros., Universal Pictures, Sony Pictures, and Paramount have signed deals with AMC Theatres to release new and old films on the store when they are out of cinemas.

Ron Sanders, president of worldwide distribution and home entertainment at Warner said: “For us, it’s all upside. Most of our other big digital partners are focused on multiple categories – music, books. The great thing about AMC is that movies are the whole focus.”

AMC Theatres is not the first cinema chain to launch such a programme. Cineplex in Canada has run a similar store for years, while British arthouse cinema chain Curzon has an online store along with a curated SVOD platform that offers 12 films per month.

AMC president and CEO Adam Aron said: “The addition of AMC Theatres On Demand, which extends our movie offerings for AMC Stubs members into their homes, makes perfect sense for AMC Theatres, for our studio partners and for our millions of movie-loving guests.”