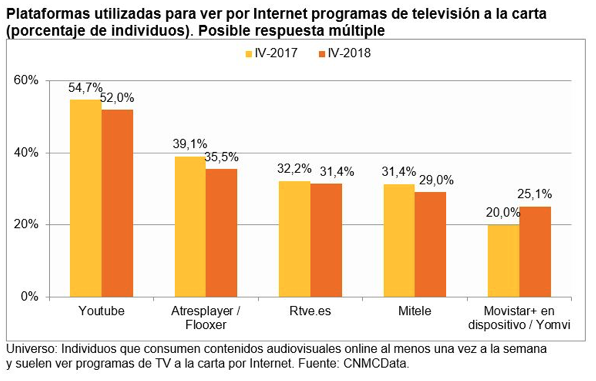 A third of Spanish households paid for online audiovisual content in 2018, according to the latest study by markets regulator the CNMC.

According to the watchdog’s household panel report, a third of homes used a pay platform to consume audiovisual content up to the fourth quarter of 2018, in line with the numbers recorded for the prior year.

YouTube was the most preferred audiovisual content platform for 52% of homes, followed by Atresplayer with 35%, RTVE.es with 31% Mitele with 29% and Movistar with 25%.

Some 44% of individuals reported using the internet to view content at least one time a week, up 8% on the 2017. Figure, with the most popular content being short videos, followed by series episodes, films and content generated by friends and family.

According to the CNMC, nine out of 10 homes reported accessing the internet over the last three months. Eighty-six per cent of those surfing the web used a smartphone, while 52% used a laptop.