European consumers value broadband network quality and coverage more than competitive pricing, and would be more willing to give up sex, holidays, their favourite TV channels and chocolate than their home broadband connection, according to a study commissioned by Liberty Global from AT Kearney.

The study, based on a survey of 8,000 consumers in the UK, Belgium, Switzerland, Poland, Ireland, France, Germany and the Netherlands, found that 38% cited qualities of broadband such as coverage, network quality and innovation as most valuable to them, compared with 33% who cited speed and bundle size and only 16% who cited price. 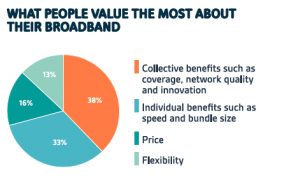 On average, consumers surveyed said they would have to be paid more to give up their home broadband than a range of other items, including, in order of importance to them, sex, holidays, favourite TV channels and chocolate. Home broadband and WiFi came first, or joint first, in order of importance in six out of eight countries, with only Switzerland and Poland, where sex was valued more, standing out as exceptions.

Broadband was especially highly valued by younger age groups, with 18-29 year-olds requiring payment of €32,500, on average, to give up broadband for a year, while 50-65 year-olds would be willing to give up their home broadband connection for €9,000.

The report, Viewed through the Lens of the Consumer: Value Creation in the Telecommunications Sector, made the claim that higher broadband pricing is actually beneficial, with countries that have higher-priced broadband benefiting from greater investment in online shopping, cloud computing, online government services and online education.

The report highlighted the high price of broadband and high level of investment in broadband in Switzerland in particular. However, the correlation in other countries was more difficult to discern and the Netherlands and France were not included in this analysis. 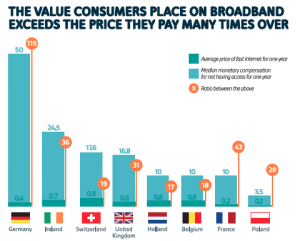 Mapping the median monetary compensation required to give up access for a year in the eight countries surveyed against the average price of fast internet connections for a year, the authors of the report also drew the – somewhat contentious – conclusion that the value consumers place on broadband exceeds the price they pay many times over.

For example, in Germany, where the gap was greatest, consumers pay an average of €400 a year for fast internet but would require median compensation of €50,000 to give it up, a multiple of 119 on the price they pay.

The lowest average price paid for fast internet across the eight countries was €100 in Poland, while the median compensation to give it up was €3,500, a multiple of 28.

The lowest multiples among the eight on this measure were for the Netherlands, Belgium and France, where the median compensation required to give up internet for a year was 10 times the average price of a connection.

Manuel Kohnstamm, chief corporate affairs officer of Liberty Global, said: “We’ve commissioned this research to shine a light on what consumers think is important about their broadband and WiFi services. In particular, the report’s key finding that price is lower down the list of priorities for consumers suggests that regulators would do well to find policies that successfully balance all prevailing factors valued by broadband users – including coverage, network quality and innovation – rather than narrowly focusing on the pricing of such services.”

Hans Boezel, principal, communications, media and technology practice, AT Kearney, said: “We fully appreciate that capturing the ‘real’ opinion of customers is always challenging. However, by focusing on understanding and appreciating the order of magnitude of various findings, this report already provides sufficient guidance for informed debate and decision-making around what is really of importance to a consumer. This not just in the limited time they are in a ‘purchasing mode’, but also when they are actually using the service itself, which they are most of the time.”