BBC drama, Bodyguard, is the most-viewed show of the year so far on the BBC’s iPlayer catch-up service, according to company stats. 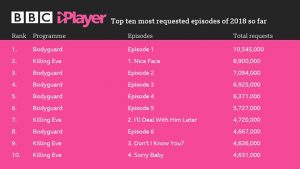 Episode one of Bodyguard become most popular episode ever on BBC iPlayer, topping the 2018 list with 10.5 million total requests to date.

Each subsequent episode of the six-part series also featured in the top-10 most-requested iPlayer episodes of the year, establishing Bodyguard as the BBC iPlayer’s best-ever performing box set with 41.3 million requests in total.

Killing Eve was this year’s other standout success story for the BBC’s digital service, with episode one of the spy thriller becoming the second-best performing episode on the iPlayer, after Bodyguard, with 8.9 million requests.

The first four episodes of the eight-part Killing Eve all made it into the top-10 most-watched shows on iPlayer this year and the series has had 40.7 million requests overall – the second-highest ratings for a boxset, again after Bodyguard.

England’s World Cup quarter final against Sweden was the most popular live programme of the year, with 3.2 million requests – 2.8 million of which were live. The BBC also highlighted November as a big month for BBC iPlayer, with 311 million requests for the month, an 8% increase on the same month last year.

“This year’s figures are the best yet and show that the BBC iPlayer is going from strength to strength. With Les Misérables, The Greatest Dancer and a new series of Fleabag coming up in the new year there will be more great programmes for audiences to enjoy in 2019.”