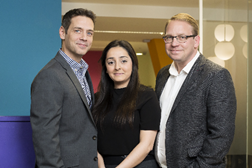 Freesat has named Martin Hughes as director of technology, responsible for leading the technology team and oversees the engineering, product and operations functions, as well as setting the company’s overarching technical strategy.

The satellite platform has also named Andre Santos as director of marketing. Santos previously worked for Sony UK and MVNO The People’s Operator, as well as working at O2 in the UK for five years, first as direct marketing manager and then as head of customer acquisition campaigns.

Finally, Freesat has named Mahshid Hadavinia as director of finance and company secretary. Hadavinia previously worked for KPMG and Elsevier.

Alistair Thom, managing director at Freesat said, “The ever-changing demand from TV viewers and the rapid growth of the industry presents the perfect opportunity for Freesat to welcome three fantastic new members to its senior leadership team. All three bring a combination of wide-ranging expertise, as well as specialist skills which will be invaluable as Freesat continues to find new ways to engage with viewers.”