The number of cable homes in Europe grew year-on-year in 2017 to reach their highest level since 2009, according to new research by IHS Markit. 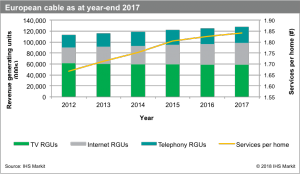 The ‘European Broadband Cable Yearbook’ report said that the number of cable homes in Europe grew to 69.2 million last year, accounting for 36.3% of all TV homes. The figure was just under the 70 million recorded in 2009, with 2017 marking the second consecutive year of growth following a period of stagnation.

Revenues for video-on-demand services increased in 2017, returning to growth following a slight downturn between 2012 and 2014. However, internet showed the most growth with revenue up 4% to €9 billion in 2017. Telephony revenue shrank for the second consecutive year, declining 0.7% to €5 billion.

Total revenue generating units (RGUs) rose 2% year-on-year to 127.5 million, largely driven by an increase in internet subscriptions. At the end of 2017, cable customers in Europe subscribed to an average of 1.8 services.

The total number of cable TV service subscribers in Europe in 2017 remained flat at 58.9 million, while Germany continued to be the largest cable TV market in Europe, with 18.7 million subscribers – more than triple the number of unique subscribers in the next biggest markets of Romania, the UK and Poland.

IHS Markit research and analysis manager, Martyn Hannant, added: “The European cable industry continues to show resilience. The industry has made significant progress in the switchover from analogue to digital cable signals.”