Liberty Global has unveiled Horizon 4, a TV platform and suite of products that includes a 4K set-top box based on the V6 hardware it offers Virgin Media customers in the UK. 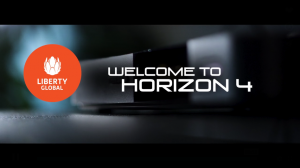 The set-top box will be accompanied by a new Horizon 4 user interface, a remote control that has voice capabilities built-in and an upgraded version of Liberty’s ‘GO’ mobile app.

Horizon 4 is the latest iteration of Liberty’s next-generation Horizon offering and is part of the company’s ‘one platform’ strategy of developing a common set of products and services across territories.

Horizon 4 is due to be introduced over the coming months to selected customers in The Netherlands, Switzerland and Belgium, with a wider rollout in these and other Liberty Global markets to follow.

The design of the new Horizon 4 set-top box is the same as Virgin Media’s V6 device, but the UK version, which is now used by nearly two million customers, runs on TiVo software while the new Liberty deployment was developed using RDK.

RDK is a platform that is managed by Liberty Global, Comcast Cable and Charter Communications. However, Virgin Media’s relationship with TiVo pre-dates Liberty’s 2013 takeover of the UK operator and remains in place.

The new Horizon 4 UI includes features like: linear TV, replay and video-on-demand; cloud DVR storage; apps including Netflix and YouTube; and Liberty has promised a “wide, constantly-updated selection of web videos and online TV channels” in the future.

The revamped GO app includes: ‘download to go’ functionality’; the ability to continue watching on a different device without losing your place in a programme; and a ‘push to TV’ function that lets viewers search for content on their mobile and then watch it on their TV.

“[Our customers] increasingly lead fluid lives meaning they view content from many different providers on many different screens, especially on mobile devices, and at very different times during the day,” said Mark Giesbers, Liberty Global’s vice-president of entertainment products.

“We want to add value to customers’ lives and deliver on their expectation of ‘any content, any device, anywhere, anytime’. That means aggregating all those TV channels, movies, series and apps into one easy-to-use, seamless viewing experience – and across multiple devices.”

Liberty launched the first iteration of its next-generation Horizon platform in the Netherlands in 2012 and since then has introduced Horizon products to seven European markets.

Horizon 4 was developed in-house by teams based at Liberty Global’s tech campus in Schiphol-Rijk in The Netherlands and was tested in more than 10,000 customer homes in different countries. It was announced at Liberty’s annual Tech Summit in Amsterdam.