Nigeria accounted for 29% of Africa’s multichannel subscribers and 22.4% of its TV households at the end of 2017, according to Kagan, S&P Global Market Intelligence. 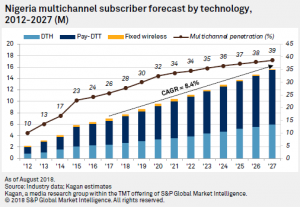 The country profile report estimates that Nigeria’s multichannel market had more than 27 million TV households and more than 6.9 million pay TV subscribers at the end of last year, up 9.1% compared to 2016.

However, pay TV household penetration remained low at almost 25.7%, compared to 52.5% in South Africa, while multichannel revenues came to US$835 million versus US$1.9 billion in South Africa.

At the end of 2017, Kagan estimates 60% of Nigeria’s TV homes subscribed to pay DTT services, while DTH had a 34.8% share, with the remainder attributable to fixed wireless services.

The research firm expects the Nigerian multichannel market to continue its growth, driven by increasing competition between existing players and new entrants like direct-to-home services Kwesé TV and TSTV, which launched in 2017.

TV household penetration in Nigeria is estimated to reach 38.6% in 10 years, while multichannel revenues are expected to climb to more than US$2.40 billion by 2027, though still lower than that projected for South Africa.

“Although ARPUs are much lower than in South Africa, leading to lower revenues, Nigeria may increasingly be an investment focus for operators due its size, low TV household penetration and rapidly growing middle class segment that has disposable income for entertainment services,” said Julija Jurkevic, senior research analyst at S&P Global Market Intelligence.

Nigeria is the most populous country in Africa with more than 190 million people. It surpassed South Africa in terms of pay TV subscriber numbers in 2015.