Virgin Media has passed 900,000 premises in Ireland with ultrafast fibre broadband as part of its Project Lightning network expansion. 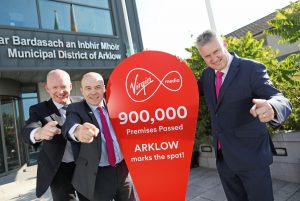 Over the past two years, Virgin Media has added 100,000 new homes and businesses to its network map in Ireland and says it is on target to reach the one million mark over the next two years.

The 900,000 premises milestone was reached in County Wicklow after Virgin Media added over 9,000 premises to its network in both Arklow and Wicklow town.

“We’re proud to be bringing Ireland’s fastest broadband network to more homes and businesses than ever, with 900,000 premises now on our network map and more to follow over the next two years,” said Virgin Media Ireland CEO, Tony Hanway.

“Project Lightning is our ongoing commitment to Ireland, connecting towns, cities, consumers and businesses with ultrafast services and enabling digital progress, productivity and economic growth in the process.”

Across the UK and Ireland as a whole, Virgin Media aims to deliver ultrafast fibre broadband to an additional four million premises as part of its Project Lightning infrastructure investment to reach a total of 17 million homes and businesses.