Cord-cutting began to take a more significant toll on pay TV outside the US last year, with pay TV numbers declining in 13 other markets, according to data from IHS Markit. 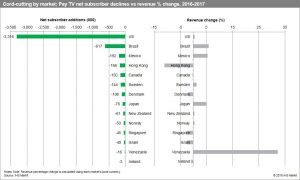 However, while pay TV numbers declined across all 13 markets and in the US, pay TV revenues fell in only six of the 14 markets affected by cord-cutting, according to IHS.

In the remaining eight countries in the list – the US, Brazil, Mexico, Sweden, Japan, New Zealand, Norway and Venezuela – operators were able to compensate for customer loses by increasing the amount of revenue generated by remaining subscribers. In the US, which has been hit hardest by cord-cutting, with 3.3 million subscribers lost over the course of the year, operators were able to collectively increase pay TV revenue by relying on upselling and price increases.

With a net loss of 3.5 million subscriptions, North America as a whole suffered its biggest-ever annual pay TV decline last year. Between 2012 and 2017, pay TV subscriptions have fallen by 7.1 million in the region. Over the same period, net additions for Netflix and other OTT TV subscription video services amounted to 101.3 million, with more than 26 million OTT subscriptions added in 2017.

Satellite subscriptions were particularly badly hit in both regions, with DTH platforms losing 1.8 million customers in North America and 882,000 subscribers in Latin America in 2017.

IHS Markit expects a further net decline in pay TV subscribers in North America between 2017-22. However, it expects pay TV in Latin America to return to growth, driven by economic recovery in Brazil.

“The cord-cutting woes of pay TV companies in the US have been well-publicised. Although the rest of the world has been broadly resisting the trend, other markets have also experienced pay TV subscription losses,” said Ted Hall, director of research and analysis for TV and video at IHS Markit.

“As part of their response to cord cutting, a growing number of pay TV operators are launching their own standalone streaming services to compete directly with offerings from Netflix, Amazon Prime Video and other OTT video companies. These virtual pay TV alternatives to traditional pay TV are more flexible and typically priced lower than operators’ core offerings. However, substituting pay TV subscriptions for OTT is only a partial solution, as these services have lower average revenue per user and are therefore worth less to operators.”