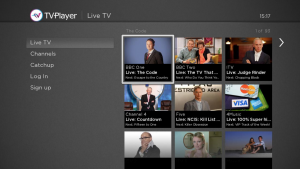 Kewley was director of digital entertainment at Virgin Media until 2016, after which he was launch director for an OTT project involving BBC Worldwide and ITV.

James was previously head of TV architecture and innovation at TalkTalk, and has also held roles with Lovefilm and Sky.

Kewley and James will be tasked with increasing the TVPlayer premium subscriber base.

TVPlayer has also announced that it added 40,000 net new customers in the last quarter of 2017. The company says it now has close to two million active users in the UK, with annualized revenues increasing by over 600% year-on-year.

“With minimal marketing spend to date, we have built a significant audience of millennial TV viewers in the UK. We uniquely offer a complete TV replacement service, including the ability to record live TV in the cloud, at an affordable price of £5.99 a month,” said TVPlayer founder and CEO Adam Smith.

“We are delighted to be able to attract executives of Scott and Nick’s calibre to enable TVPlayer to disrupt the pay TV ecosystem in the UK market. Their industry experience will be hugely valuable in helping the business double-down on its trajectory as the UK’s fastest-growing complete pay TV service.”