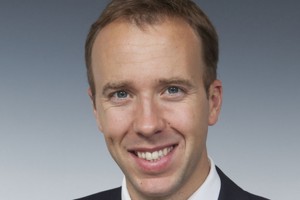 Hancock replaces Karen Bradley who has now been appointed secretary of state for Northern Ireland. She in turn replaces James Brokenshire who has stepped down from frontline politics.

Hancock Tweeted: “Thrilled to become DCMS secretary. Such an exciting agenda, so much to do and great people. Can’t wait to get stuck in.”

In his new role, Hancock will now be responsible for deciding whether 21st Century Fox’s planned £18.5 billion (€20.5 billion) takeover of Sky will be allowed to proceed, and any conditions that should be applied.

Bradley referred the deal to the Competition and Markets Authority in September on the grounds of both broadcasting standards and media plurality. The inquiry is due to close by March 6, after which a decision will be made.

She said the government must deliver a Brexit that recognises Northern Ireland’s unique circumstances and “avoids a hard border on the island of Ireland while maintaining the economic and constitutional integrity of the United Kingdom”.

Matt Hancock’s replacement as digital minister is yet to be announced.