Bloomberg and Twitter have launched TicToc by Bloomberg, a round-the-clock global news network built specifically for the social media platform. 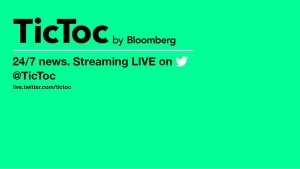 The companies said that the service targets the “next generation of on-the-go, mobile-first news consumers” and combines Bloomberg’s news gathering capabilities with Twitter’s digital power and immediacy.

TicToc by Bloomberg goes live today and will feature a mix of live video and reporting from Bloomberg journalists around the world and breaking news that is curated and verified by Bloomberg editors. It will focus on global, general-interest news.

“With TicToc by Bloomberg, we’re fusing the best of Bloomberg and Twitter to build a fast and credible modern news experience.”

Twitter chief operating officer, Anthony Noto, said: “Twitter is where people go for breaking news, and now our global audience can turn to TicToc by Bloomberg at any time to see what’s happening in the world no matter where they are.

“Combining the journalistic integrity of Bloomberg with the speed and global availability of Twitter makes this a collaboration we are really excited about.”

Bloomberg editor-in-chief John Micklethwait added: “It’s early days, but what makes TicToc by Bloomberg unique is that consumers will be able to watch live news and the conversation around it at the same time, all while a dedicated team of Bloomberg editors verifies the facts. We’re leveraging our journalism and data to reach and inform an intelligent audience on Twitter around the world.”

TicToc by Bloomberg is available at live.twitter.com/tictoc