T-Mobile in the US has acquired TV technology company Layer3 TV and has announced plans to launch a “disruptive new TV service” in 2018. 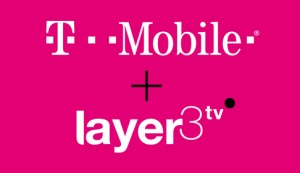 The mobile operator said it will work with Layer3 TV’s technology and team to create a new TV service aimed at people who are “tired of all the BS that comes bundled with big cable and satellite TV”.

“People love their TV, but they hate their TV providers,” said John Legere, president and CEO of T-Mobile. “Worse, they have no real choice but to simply take it – the crappy customer service, clunky technology and outrageous bills loaded with fees.

“That’s where we come in. We’re going to fix the pain points and bring real choice to consumers across the country.”

Legere said that the T-Mobile TV service will be available to customers across “every connected device you have, wherever you are”, and that it will be built for the “the mobile age and for the 5G era”.

“How we watch TV is undergoing enormous transformation,” he said. “Mobile is now the number-one way millennials watch TV and other media and 2.8 million people have cut the cord in the last two years. In the face of all this change what does big cable do? I’ll tell you: they do more of the same old bullshit. That’s why traditional cable TV and satellite is struggling so hard.”

Layer3 entered the US pay TV market last year with backing of almost US$100 million from private equity firm TPG and talent agency CAA. Today its pay TV service is available in five US cities and offers a line-up of TV channels, online video content and social media.

“We’re in the midst of the golden age of TV, and yet people have never been more frustrated by the status quo created by big cable and satellite TV,” said Mike Sievert, chief operating officer of T-Mobile.

“That’s because the world is changing – with mobile video, streaming services, cord cutting, original content and more – and yet, the old guard simply can’t, or won’t, evolve. It’s time for a disruptor to shake things up and give people real choice.”

The Layer3 TV purchase was agreed for undisclosed terms. T-Mobile said it expects the deal to close in the next few weeks.