BT is making 360º highlights and instant replays available from a range of sporting events via the BT Sports App. 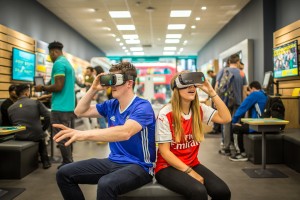 Starting this week, viewers will be able to watch immersive highlights from the UEFA Champions League football match between Paris Saint-Germain and Bayern Munich.

BT said it aims to show 360º footage from a minimum of 20 sporting events before June 2018 – including highlights from Champions League, Premier League and FA Cup football and World Title Boxing.

The highlights and replays will be available alongside standard replays on the BT Sport App’s enhanced video player, which also allows viewers to select different camera angles and viewpoints.

“This is another first for 360° broadcasting,” said Jamie Hindhaugh, chief operating officer, BT Sport. “It’s another step forward in broadcast innovation that will give BT Sport the best possible viewing experience and shows BT Sport continues its commitment to be at the heart of this.”

“We’re passionate about sport and technology and want to continue to explore new ways to combine them for the benefit of our viewers and bring them closer to the action.”

The launch comes after BT Sport first experimented with immersive content by showing the UEFA Champions League final through a number of 360°streams on YouTube and the BT Sport App earlier this year.

RT @axonista: We have some exciting news! We are shortlisted at the Video Tech Innovation Awards from @digitaltveurope 🎉😄We have been short…
26 October 2020 @ 11:55:53 UTC

RT @OWNZONES: OWNZONES' Discover has been shortlisted for the @digitaltveurope VideoTech Awards in the category of 'OTT TV Technology of th…
26 October 2020 @ 11:55:40 UTC

RT @Bubble_Agency: Congratulations to Bubble client @OWNZONES who have been shortlisted for the @digitaltveurope VideoTech Awards. Best of…
26 October 2020 @ 11:55:34 UTC