Almost five million people in France watch TV daily via the internet, up by one million in a year, according to the latest data from audience research outfit Médiamétrie. 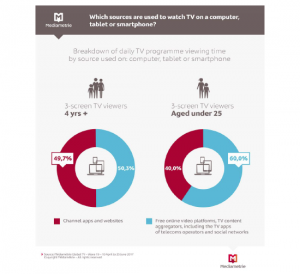 Some 4.9 million individuals aged four and above watch TV programmes live or as catch up on internet screens, meaning via computers, tablets and smartphones, according to Médiamétrie.

Over half of internet TV viewers are aged under 25, compared with 26% of the overall population. The 2.5 million under 25s viewing TV on the web is up buy a third from last year, with each watching an average of 1 hour 51 minutes online.

The TV set remains by far the most popular screen for watching TV programmes, accounting for 96% of viewing time. However, whereas computers were the most important internet device for viewing shows, this year computers have been overtaken by mobile screens, which now account for 54% of online viewing time.

About half the time spent watching internet-delivered TV is via channels’ websites and apps, with under 25s being more likely to watch content on online platforms such as YouTube or Daiulymotion, or the apps of OTT TV providers such as Molotov and MyCanal as well as pay TV operators’ apps and social media networks.