Popcornflix acquired by Chicken Soup for the Soul Entertainment 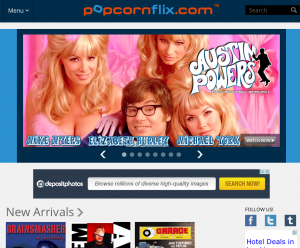 CSS Entertainment said the deal will help it to achieve its “ambitious growth plans”. It puts it in charge of Screen Media’s content library of over 1,200 TV series and feature films and the Popcornflix on-demand service.

The cash-and-stock deal included a cash payment by CSS Entertainment of US$4.9 million and the issuance of 35,000 shares of CSS Entertainment’s Class A common stock, and was completed after the market closed on November 3, 2017.

“We are extremely fortunate to have had the opportunity to acquire Screen Media’s valuable assets at a significant discount to their appraised value, intrinsic value and replacement cost,” said William Rouhana Jr, CSS Entertainment’s chairman and CEO.

“We had been following Screen Media closely and were patient in waiting for an attractive opening to acquire these assets. Given our familiarity with Screen Media, our strong balance sheet with ample liquidity and no debt, we were well positioned to move forward quickly with the purchase.”

Popcornflix is available in 56 countries and currently has the rights to more than 3,000 films and some 1,500 TV episodes over 60 series.

CSS Entertainment claims that the Popcornflix app has been downloaded some 24 million times on iOS and Android smartphones and other devices, and for the year ending September 30 had 15 million active users.

Chicken Soup for the Soul Entertainment claims to provide positive and entertaining video content that brings out “the best of the human spirit”.

As of September 30, the company had in excess of US$15 million in liquidity and no debt. Scott Seaton, CSS Entertainment’s vice chairman and chief strategy officer said: “We now expect our Q4 2017 Adjusted EBITDA to substantially exceed US$10 million.”