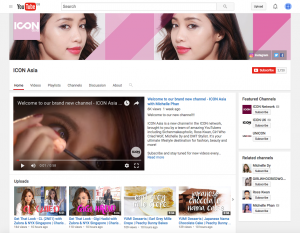 Endemol Shine Beyond has launched an Asian version of its lifestyle-focused ICON YouTube channel.

ICON Asia will air local fashion, travel, lifestyle and beauty content and will sit alongside Endemol’s ICON Network counterparts in the UK, US, France and Germany.

The online channel will be launched out of Endemol Shine Beyond’s Asia hub in Singapore and will initially be produced in English. However, Endemol said that is has plans to diversify into the native languages of its on-screen talent to reach wider audiences.

ICON Asia will feature YouTube talent from across the region – including make-up, fashion and beauty vloggers like Sichenmakeupholic, Michelle Dy, Ross Kwan and Girl Who Cried Wolf.

YouTube star Michelle Phan, whose make-up tutorials have netted her more than 8.5 million subscribers, will also appear. Phan is responsible for creating the Endemol-backed ICON Network, which first launched in the UK and US in April 2015.

“ICON Asia and the greater ICON Network speaks to a millennial audience that is both digitally native and hungry for information,” said Christopher Smith, head of Endemol Shine Beyond Asia.

“We’re excited to join Michelle Phan, our global network talent, and our outstanding local talent on this journey to expand the ICON Network in the Asia region.”