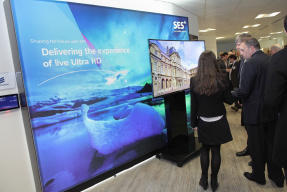 Satellite operator SES believes there will be over 1,000 Ultra HD channels by 2025, and that UHD TV sales will grow rapidly as prices fall. The company calculates that there are currently over 1,200 UHD movies and shows available with a further 200 expected by the end of this year.

Speaking at an event at IBC in Amsterdam, chief commercial officer Ferdinand Kayser said that “we think satellite will be the leading infrastructure provider for UHD. Compared to other distribution networks we have the advantage of having ample bandwidth…and ubiquitous coverage”.

Kayser said the addition of High 4K TV and, in mid-October, TV Entertainment Reality Network, would mean that the group will soon have four full-time 4K channels on its platform.

More broadly, Kayser said linear TV shows no signs of going into decline, with growth increasingly being driven by emerging markets. SES expects the number of DTH channels to grow by 47% by 2024, with the number of channels in Africa and the Middle East growing by 6.1%  a year to about 2,850 and the number in central and eastern Europe growing by 6% to 5,150. Even in a mature market such as western Europe, the company sees linear channels growing by 4.5% to 3,650. Overall, SES expects there to be about 38,500 channels being broadcast over satellite to homes by 2024.

Kayser said that growth in non-linear viewing was not having much impact on the linear channel business, but was rather substituting physical media formats such as DVDs, sales of which were in decline.