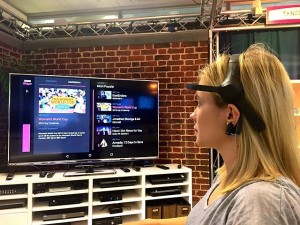 The BBC is working on a mind-control powered remote that lets viewers select programmes on the iPlayer using only their brainwaves.

The BBC has trialled the ‘Mind Control TV’ prototype internally using a low cost brainwave-reading headset and an experimental version of its catch-up service, in an experiment designed to give programme makers and technologists an idea of how the technology might be used in the future.

“It was much easier for some than it was for others, but they all managed to get it to work. And it’s been a similar story for everyone who’s tried it out in our BBC technology Blue Room since.”

Saihan said the technology has the potential to improve the accessibility of media content to people with a range of disabilities, who cannot easily use traditional TV remote controls or other conventional interfaces.

The BBC also said that the technology could become another, more advanced version of the voice control already used in devices like the Xbox One – though it stressed it is still “very early days.”

“Our proof-of-concept is only an experiment and just a toe in the water, but it helps our initial understanding of how we might be able to control devices using our brainwaves in the years to come,” said Saihan.

The BBC worked with London based user-experience studio This Place to create the Mind Control TV prototype.