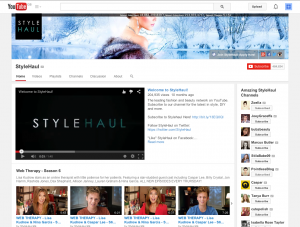 Speaking to DTVE, Stafford said that the fashion and beauty-focused business already has offices in London, Los Angeles, New York, Chicago and Singapore and plans to continue to grow in line with market needs.

“Our audience is all over the world …[and] we have talent that live in 62 different countries,” said Stafford.

He added that the decision to open an office or invest in a new market was driven by two factors – whether the needs of YouTube content creators require it, and whether advertisers want to access that market but need someone on the ground to help them.

Last month, RTL Group agreed to pay US$107 million (€85 million) to buy a controlling stake in StyleHaul, which counts YouTube talent including Zoella, Tanya Burr and Marcus Butler among its ‘StyleHaul Millionaires.’

At the same time, RTL pledged to invest a further US$20 million in the MCN to fund the company’s growth plans.

Stafford said that StyleHaul hasn’t worked out specifically what it will use that cash for yet, but that it will help drive its overall strategic aims, which are “to have a big audience, make great content for that audience and help our talent make a career out of this thing that they love.”

“We’re growing so fast in this industry and our audience is doubling every year and our revenue is tripling every year – there’s so many things that we could do,” said Stafford.

Looking forward, he said that in the UK 75% of StyleHaul’s views already happen on mobiles and tablets and the firm is looking at how it uses services like Instagram and Twitter as distribution channels.

“It’s an exciting time, because we’re changing the definition of how you distribute content and whether content has to be 30 minutes scheduled on a Tuesday afternoon, or if it can be an image that you send out on Instagram. It’s all the same business to us,” said Stafford.