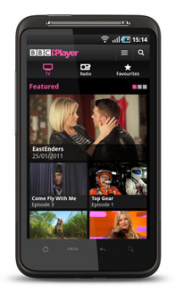 The BBC’s iPlayer app has now been downloaded a total of more than 20 million times across iOS and Android devices, the corporation announced today.

The BBC catch-up first went live online on Christmas Day 2007, with the dedicated iPlayer apps launching on iOS and Android in February 2011.

The BBC said that the milestone comes as more viewers turn to their mobile or tablet, instead of their PC, to watch online TV.

“With over 20 million downloads of the app and record-breaking BBC iPlayer requests on handheld devices, we are thrilled that viewers are increasingly taking their favourite BBC shows with them to watch whenever and wherever they are. And with tablets the top of many people’s Christmas list for 2013, we expect this to continue to grow even further,” said Dan Taylor, head of BBC iPlayer for BBC Future Media.

Christmas Day 2011 and 2012 were the top days for iPlayer app downloads to date, with 229,200 and 385,600 downloads respectively, when many smartphones and tablets were unwrapped and switched on for the first time, said the BBC.

Last month, 70 million requests to stream or download programmes on mobiles and tablets were received by the BBC, with BBC Three comedies dominating the top programmes viewed on mobile devices.