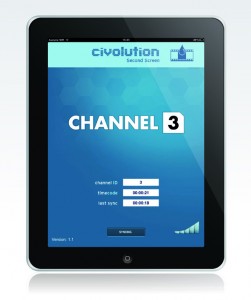 Content identification technology provider Civolution is to showcase synchronised second-screen applications developed by some of its partners including Ex Machina, Miso and Vejo Park, based on Civolution’s VideoSync watermarking technology at IBC.

Civolution’s VideoSync second screen product allows for the automatic identification of the TV channel being watched and content being played. Upon identification it enables precise time-synchronisation between content played on TV and portable devices such as tablets, smart phones and PCs. The real-time interactivity between the devices, enabled by content identification, automatically handles distribution delays and supports time-shifted viewing, according to the company.

Civolution’s partners at the show for the demonstrations include Ex Machina, which has developed PlayToTV, a platform that enables TV shows such as talent contests, sports, game shows and reality to provide real-time and social interaction such as live rating, voting, polling, quizzes, chat and twitter feed aggregation. Ex Machina has powered interactivity for shows such as The Voice of Holland and Germany’s Next Top Model.

Other partners are Miso, which provides synchronous second screen experiences for consumers by integrating with broadcast, hardware and content partners, and Vejo Park, whose subsidiary HyperTV unit has developed the eXperience multimedia platform. “

Media interaction is one of the hottest trends in the broadcast industry so it’s really exciting to be a key enabler and see such innovative interactive applications on the Civolution stand,” said Alex Terpstra, CEO, Civolution. “By synchronising second screens and connected devices with the TV programme in real-time, we’re really opening up the broadcast stream for interactivity and triggering. Content owners, broadcasters and advertisers are now able to offer a more immersive event-based viewing experience over which all players have greater control and which offers deeper consumer engagement.”

Civolution will be exhibiting at IBC on Stand 2.C30