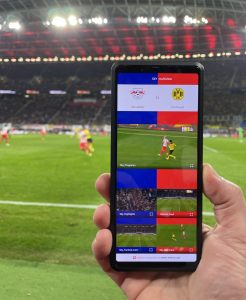 The app is desiged to provide a new ​​in-stadium experience, making exclusive content and different camera angles available to Sky subscribers in the stadium where the match is being played.

Trial participants in the Red Bull Arena were able to view event highlights on their smartphones from various camera angles in the stadium.

For the trial, Vodafone activated what it claims to be the fastest ‘5G Turbo’ available. By using high radio frequencies in the 26GHz range, known as 5GmmW frequencies, the app achieved speeds of up to 2.6Gbps via the Vodafone cellular network. In the future, Vodafone says that bandwidths of up to 10Gbps will be possible in the ultra-high band.

The first test version of the Sky 5G Multiview App was built by Smart Mobile Labs on behalf of Sky.

The pair used an Xperia PRO from Sony, not currently available in Europe, that already support the 5GmmW frequencies, connecting the device to a Sony Alpha camera or another camera with an HDMI output to transmit videos in real time via a 5G data connection.

Using compatible third-party live streaming applications, the Xperia PRO can stream video content from a camera connected to the HDMI input to an RTMP stream server or directly to social media platforms, the pair said.