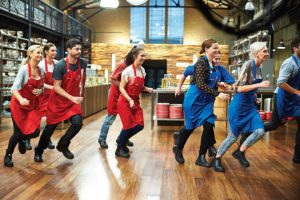 Banijay has formally completed its US$2.2 billion acquisition of Endemol Shine Group, marking the end of a two-year process and the beginning of a period that will see the two companies combining their operations.

The enlarged group will be led by Banijay’s CEO Marco Bassetti, with ESG’s chief Sophie Turner Laing stepping down from her role and exiting the company on 10 July.

The acquisition marks a giant leap in scale for Banijay, which will now own approximately 200 entities across 22 countries, according to the French firm.

The deal makes Banijay the largest content producer and distributor outside of the US studios, with a catalogue of more than 88,000 hours across all genres. Total pro-forma revenue in 2019 for the combined group, which will retains its Banijay name, was €2.7 billion

The deal’s completion comes nine months after the French production and distribution giant struck a “definitive agreement” to acquire from ESG owners Apollo Global Management and Disney. Yesterday, the deal was formally greenlit by the European Commission.

Discovery, ITV and Liberty Global-backed All3Media had all been linked with the outfit, which  before Banijay struck its deal. The combined group is owned by French duo LDH (67.1%) and Vivendi (32.9%). LDH is a holding company controlled by Financière LOV (52%), the investment firm controlled by Banijay chairman Stéphane Courbit. Italian group De Agostini (36%) and French finance group Fimalac are also investors in LOV.

Marco Bassetti, CEO at Banijay, said: “The close of this unique deal represents the joining of two businesses built on entrepreneurialism, creativity and people. Aligned in thinking, and approach, we now stand together as the world’s largest international content creation and distribution group.

“Expanding our catalogue and investment in high-quality, multi-genre IP, extending our footprint significantly, and welcoming a number of new world-class creatives, we hope to become a go-to for clients, and home for the best talent to create the most innovative and fresh scripted and non-scripted programming.

“With newfound scale and increased strength in the industry, we are excited by the path ahead. I’d like to finish by thanking Sophie for her ongoing support and hard work in such a challenging year.”

Turner Laing added: “This deal bookmarks a creatively rich, commercially successful and relentlessly prolific five and a half years as Endemol Shine Group.

“It has been a real privilege and honour to lead such a talented and dynamic group of people, each of whom has played their part in, and should be proud of, our many collective successes over this time.

“As the start of an exciting new chapter in the company’s story, it is also the appropriate time for me to step down as CEO, and I wish Marco and his team the very best for the future.”

ESG was formed in 2014 when Elisabeth Murdoch’s Shine Group, owned by 21st Century Fox, was combined with format giant Endemol and US counterpart Core Media, which were both owned by investment firm Apollo Global Management.

Core was later hived off, eventually emerging as a slimmed-down producer after filing for Chapter 11 bankruptcy protection. Disney then picked up its 50% stake in ESG after acquiring a raft of entertainment assets from Fox earlier this year.

Banijay, meanwhile, was founded by Courbit through his LOV group, with Italian conglomerate De Agostini. The production and distribution company has bought numerous firms over recent years, most notably acquiring Zodiak Media in 2016, again with the assistance of French media giant Vivendi.

On the distribution side, ESG’s sales chief Cathy Payne initially stepped down last year, but has since returned to become Banijay’s distribution chief.