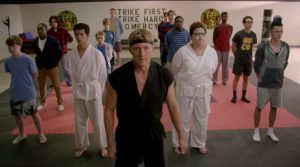 Scripted martial arts drama Cobra Kai has moved to Netflix after the show was revealed to be leaving YouTube Premium last month.

With YouTube no longer airing scripted content, after moving from an SVOD to AVOD service, the Sony Pictures TV-produced spin-off from The Karate Kid film franchise will premiere its upcoming third season on streaming giant Netflix at an as-yet unannounced date, with the first two seasons to be made available later this year.

News of the move came 36 years to the day of the first Karate Kid film. The series sees original stars Ralph Macchio and William Zabka reprise their roles as sporting rivals Daniel LaRusso and Johnny Lawrence, decades after their first bout.

“The appeal of The Karate Kid saga is timeless, and Cobra Kai picks up right where it left off without missing a beat,” said Brian Wright, VP of original series at Netflix. “The rivalry between Daniel and Johnny is one for the ages, and the show has a ton of heart and is a lot of fun. We can’t wait to introduce a new generation of fans to Cobra Kai and are thrilled to be its new home around the world.”

The show’s executive producers Jon Hurwitz, Hayden Schlossberg, and Josh Heald commented: “Making Cobra Kai has been a dream come true for us since day one. “We are beyond excited to join our new partners at Netflix and look forward to the show reaching the massive global audience who loves this franchise as much as we do.”

YouTube Premium’s move from SVOD to AVOD led to a slate of high-end drama and comedies, including sci-fi drama Origin and comedy Overthinking with Kat & June, being cancelled, leaving only a smattering of original scripted projects left.