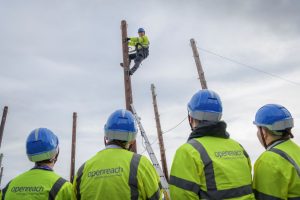 Openreach said it is on track to reaching three million homes and businesses with full-fibre broadband by the end of 2020, with the new build areas taking its number of towns cities and boroughs to 25.

At the same time, Openreach announced that it will hire 3,000 new trainees – around 1,600 in newly created roles – over the next 12 months, extending its largest recruitment drive to date.

A total of 6,500 apprentice engineers are due to be hired over this year and next to support Openreach’s broadband plans.

“In the last year, we’ve learnt to build at high quality, and at a competitive cost. This year, we’ll prove that we can build the network on a vast scale and connect customers seamlessly,” said Clive Selley, chief executive of Openreach.

“We’re making great progress towards reaching our target of upgrading three million homes and businesses to full fibre by the end of 2020 – reaching another 13,000 premises per week – and these new recruits will play a crucial role in that programme.”

UK minister for digital, Margot James, said: “Openreach’s publication of clear plans for where, when and how they will be investing in new fibre networks is an important step. Long term commitments from the industry like this are very important for local communities who need this kind of guarantee on when they will be able to take advantage of the benefits that fibre can bring.”