Digital accounted for 72.3% of video revenues in the UK in 2018, but DVD and Blu-ray are still important for delivering the top-selling titles, according to trade body the ERA. 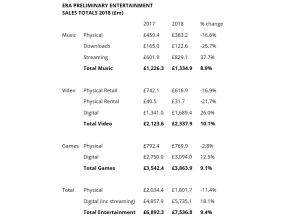 Despite this, the best-selling film-to-own in 2018 was Hollywood musical The Greatest Showman, which sold 2.69m units – 71.3% of them on DVD or Blu-ray disc. The ERA found that of the top 20 films-to-own last year, an average of 74.1% of sales were from physical formats.

“Video was arguably entertainment’s most dynamic sector in 2018,” said ERA CEO, Kim Bayley. “Streaming services have transformed the viewing choices of the British public by offering 24/7 access and convenience.

“Meanwhile sales figures show the continuing loyalty of video consumers to DVD and Blu-ray, still the default choices for gift-buying and building a video collection.”

Across all entertainment categories – video, music and games – total physical and digital revenues were up 9.4% year-on-year at £7.537 billion, with the games sector heralded by the ERA as the “biggest winner in digital entertainment’s digital transformation”.

For the first time in 2018, games were found to account for more than half of the entire UK entertainment market at 51.3% – some £3.864 billion across physical and digital. This was thanks to growth areas like direct-to-console downloads and mobile and social gaming.

“The games industry has been incredibly effective in taking advantage of the potential of digital technology to offer new and compelling forms of entertainment,” said Bayley. “Despite being the youngest of our three sectors, it is now by far the biggest.”