Nickelodeon has launched a subscription video-on-demand service dedicated to its content “from the 1990s and beyond” via US streaming platform VRV. 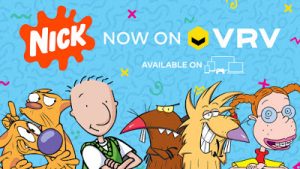 “VRV, with a sophisticated user base that loves the best in animation, is the perfect platform to launch our NickSplat channel,” said Sam Cooper, Viacom executive vice president of distribution and business development partnerships. “Viacom’s content – including our deep library of genre-defining television – is highly in demand, and our audiences are always looking for new and innovative ways to enjoy our programming.”

VRV’s head of content partnerships, Eric Berman, said: ““Our partnership with Viacom is a first of its kind. We’re very proud to be the premiere launch partner to bring a NickSplat channel into SVOD and share these nostalgic series so our passionate audience can fall in love with them all over again.”

NickSplat will be offered as part of the US$9.99 per-month VRV Premium offering, or viewers can subscribe to the service on its own for US$5.99 per month.

VRV defines itself as a “fan-first streaming service” that covers topics like anime, sci-fi, tech and cartoons. The service offers 20,000 hours of free content, though VRV Premium offers exclusive programming, an ad-free experience and access to new content first.