Netflix and Sony have partnered on Netflix Calibrated Mode, a new feature for select Sony Bravia TVs that is designed to ensure “cinematic fidelity” when viewers watch the SVOD service. 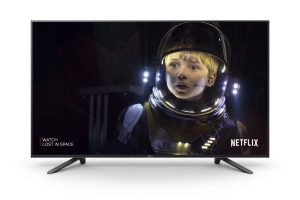 Developed by Sony picture quality engineers in collaboration with Netflix colour scientists, Netflix Calibrated Mode is designed to deliver picture quality similar to that of a master monitor used for referencing in film production studios.

The mode is available exclusively on the new Sony Master Series A9F OLED and Z9F LCD TVs and aims to produce the precise colours and accurate dynamic contrast that was intended by the creator of a series or film.

“With one simple menu setting, our members can view TV shows, films, and documentaries on Netflix as they were meant to be seen, with precise colours, accurate dynamic contrast, and true motion so there’s no ‘soap opera effect’,” said Scott Mirer, vice president, device partner ecosystem at Netflix.

“Preserving creative intent is important not only to the storytellers but also to the viewer, because colour, brightness and sound are all part of the story.”

Sony Electronics North America’s president and chief operating officer, Mike Fasulo, said: “In recent years, we have seen great advances in technology that have made an unprecedented impact on the way TV and film entertainment is consumed.”

“Sony and Netflix have put much effort into developing and supporting cutting-edge technologies, such as 4K picture resolution, high dynamic range and Dolby Atmos sound that allow film professionals to authentically express their vision for fans to enjoy in their homes around the world.”

Netflix claims that today roughly one-third of smart TVs that use Netflix support HDR and that viewing hours for 4K and HDR content has been “climbing dramatically”.