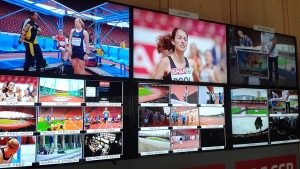 The European Broadcasting Union will lead the trials in collaboration with five EBU Members – the BBC, France Télévisions, IRT, RAI and ZDF.

Nineteen industry partners working across production workflows have also come on board to help shoot, process, record, and distribute footage of the event, which will take place in Berlin and Glasgow in August.

“Current state-of-the-art live broadcasts don’t exceed a field or frame rate of 50Hz in Europe, and HD interlaced (1080i25) is still the dominant broadcast emission format even though commercial encoders and TV sets manage up to 2160p50 resolution,” said the EBU in a statement.

The 2160p100 feed will be used to derive two additional 1080p100 and 1080p50 signals. The former of these will include NGA sound in the form of 4+7+0 channel and scene-based beds, with four additional interactive mono object signals for two commentaries and two audio descriptions.