SES broadcasts 8K TV via satellite for the first time

Satellite operator SES is broadcasting an 8K television signal via its satellite system for the first time during its annual SES Industry Days event in Luxembourg this week. 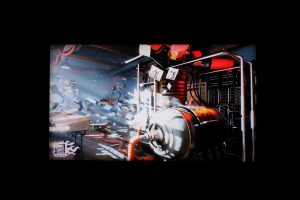 The demonstration ran yesterday and is due to run today at the event, with the 8K signal transmitted via a single 36 MHz transponder on the Astra 3B satellite.

SES said that the demo relies on the DVB-S2X standard, which enables greater efficiency. The video is encoded in HEVC and transmitted at a rate of 80 Mbps – four times higher than for a 4K signal.

The test transmission also uses a native IP formatted signal, which SES said will provide some insights into the requirements of a future all-IP broadcast infrastructure for television.

Spin Digital, which can decode and playback 8K HEVC signals in real-time using a software solution, is a partner or the trial, with Sharp providing the 8K screens.

“Even though 8K remains challenging with the video codecs available today and is several years away from introduction to consumer homes, this demonstration shows that satellites are now capable of carrying 8K signals,” said Thomas Wrede, vice president, new technology and standards at SES Video.

“As we always strive to take the video experience to the next level, we are very proud to provide this exciting glimpse at the future of television. At the same time, we continue to be very much focused on supporting our customers and partners in bringing current technologies, such as 4K UHD and HDR, to consumer homes.”