The UK government says it has delivered its manifesto commitment to extend superfast broadband to 95% of UK homes and businesses by the end of 2017. 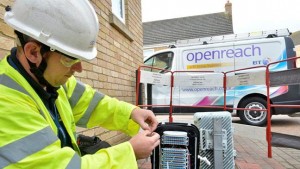 Culture minister Matt Hancock announced the news today after independent broadband news and information site ThinkBroadband confirmed that more than 19 out of 20 UK homes and businesses can now upgrade their internet connections to superfast speeds of 24 Mbps or faster.

The £1.7 billion government rollout of superfast broadband to areas deemed ‘not commercially viable’, mainly  rural areas, has reached more than 4.5 million UK premises “that would otherwise have been left in the connectivity slow lane,” according to the government.

It added that this closing of the “digital divide” has also created around 50,000 new local jobs and is generating an additional £8.9 billion in turnover in the areas covered by the government rollout between 2013 and 2016.

“Over the last five years, the government’s rollout of superfast broadband has made superfast speeds a reality for more than 4.5 million homes and businesses who would otherwise have missed out,” said Hancock, the secretary of state for digital, culture, media and sport.

“We’ve delivered on our commitment to reach 95% of homes and businesses in the UK, but there’s still more to do in our work building a Britain that’s fit for the future. We’re reaching thousands more premises every single week, and the next commitment is to making affordable, reliable, high speed broadband a legal right to everyone by 2020.”

ThinkBroadband said that 95.0079% of UK homes and businesses can now access superfast broadband, but stressed that this figure is “not a consistent 95% across all communities in the UK”.

It said that while areas like Epson, Tamworth and Watford now have 99% superfast coverage, places like the Orkney Islands, Western Isles and Kingston Upon Hull still only have superfast coverage of 66.8%, 71% and 71.7% respectively.

The government said that around 800,000 homes and businesses were connected last year through the government’s broadband delivery UK scheme, with BT’s infrastructure arm Openreach “working hard throughout the winter months to ensure the rollout remained on track.”

“This is without doubt an extraordinary achievement and I’d like to thank the thousands of Openreach engineers and the many more of our people supporting them, who have worked so tirelessly to make this happen,” said Openreach CEO Clive Selley.

“We have come a long way in a short space of time, with one of the fastest broadband deployments in the world. This is an important milestone – but we’re not stopping here. We’re determined to get Britain – the whole of Britain – hooked up to decent broadband speeds.”

Last month the UK government rejected BT’s offer to voluntarily invest up to £600 million to deliver 10Mbps broadband to 99% of the UK by 2020, instead opting for a regulatory universal service obligation.

The move grants UK residents a legal right to broadband speeds of 10Mbps, meaning that every home and business not getting this level of service is entitled to request it. The government said at the time that after careful consideration it had decided that regulation is “the best way of making sure everyone in the UK can get a decent broadband connection of at least 10 Mbps as soon as possible.”