Netflix completely dominated Parrot Analytics ‘in-demand’ analysis of digital originals in France for the week of January 8-14, with Stranger Things and Black Mirror far and away the top titles. 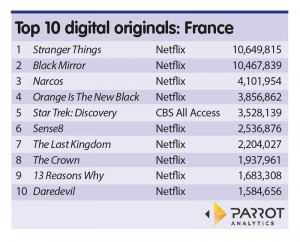 The two titles were by far the most in-demand originals for the week. Third-placed Narcos generated 4.1 million expressions, followed by Orange is the New Black, with 3.86 million.

In fifth place was CBS All Access’s Star Trek Discovery, which is distributed by Netflix outside the US, with 3.53 million in-demand expressions.

The other titles in the all-Netflix top 10 are Sense8, The Last Kingdom, The Crown, 13 Reasons Why and Daredevil.

Stranger Things had topped the chart in a number of markets in the last few months, including Italy, Spain, Denmark, the UAE, South Africa and Hungary.