The CSTB event held in Moscow this February will highlight key trends in the Russian and CIS pay-TV and broadband industries. Informa’s latest Eastern Europe TV report and World Broadband Information Service provide a snapshot into this evolving market.

Russia is home to a vibrant but underdeveloped pay-TV market, in which ownership of TV companies is concentrated into a few conglomerates. Major investment is occurring in network upgrades covering cable, IPTV and DTT, while the number of DTH subs continues to grow rapidly. Numerous telcos now offer triple-play packages and in many cases the quality of their TV offerings surpass that of cable operators. However, cable investment is booming, which is leading to consolidation amongst the 600 or so operators.

Whilst definitive data for the number of cable subscribers in Russia is difficult to come by, Informa Telecoms & Media estimates that there were around 18.7 million at the end of 2008. However, the country’s pay-TV market needs to be put into perspective – about 70% of subscribers only take a ‘social package’ of terrestrial channels, which doesn’t cost much. In Moscow, for example, people pay on average US$1.50 (€1.05) per month for such services, and that falls to just US$0.20 in the regions. However, triple-play packages are proving particularly popular with cable subscribers, a fact that has seen the value of the cable market rise in recent years. The Russian cable TV Association has estimated that the combined value of the broadband and cable markets will reach US$4bn by the end of the year, compared with US$650m in 2007.

Russia’s cable market is highly fragmented, with over 600 operators but context is again all-important as only 10% of these have more than 20,000 subs and just six companies control 60% of subscribers – consolidation is clearly likely to continue during the coming years.

National Cable Networks (NCN) is part of National Telecommunications (NTK), which is itself owned by Russia’s National Media Group, and currently has the largest number of subscribers with over four million dispersed over eight cities. It provides cable TV and broadband services in Moscow (Mostelecom and OnLime) and St Petersburg (TKT) while its regional operations include Eltelekor in the city of Electrostal, near Moscow, and providers in Ekaterinburg, Novosibirsk and Kurgan. 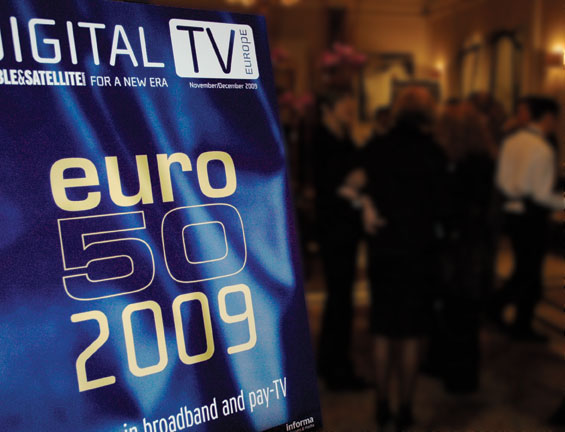 NCN launched the OnLime brand at the end of 2008 and by May 2009 its fibre-to-the-home network, which is being deployed alongside Mostelecom’s cable TV network, was accessible to about 43% of Moscow’s households. The company offers triple-play packages, including some HD channels and video-on-demand. Mostelecom’s hybrid cable/IP network reaches over three million subs. When network upgrades are complete, scheduled for this year, the operator is aiming to persuade 10% of its subscribers to take its 30-channel digital TV offering. TKT, meanwhile, covers 70% of St Petersburg’s households but the majority of subscribers still opt for the social package of channels.
Russia’s second largest MSO, AFK Sistema, has interests in cable, IPTV and mobile TV. In February 2009, the ownership of all of AFK Sistema’s TV interests were placed under subsidiary Comstar-UTS, which also operates IPTV services. In early-2009, Comstar revealed that following its merger with Stream-TV and its affiliated companies in 40 cities across the country, the combined group served almost 2.1 million pay-TV subscribers, over one million internet subscribers and almost four million telephony customers. Stream alone had 1.8 million pay-TV subscribers at the end of 2008 but 390,000 only took the social package, which meant TV ARPU was just RUB123 (?2.87) in 2008, compared to RUB376 for broadband services.

Comstar has already played a major role in consolidating Russia’s cable industry. Besides Sistema, last year it acquired regional assets of eight cable companies operating in various regions in the country as a result of internal restructuring. All companies were acquired from JIR Broadcast, a subsidiary of Comstar.

Despite the company’s growth, and the success of its broadband offering, it’s worth noting that Comstar’s triple-play subscriber base fell by 3% quarter-on-quarter to 128,000 at the end of September, a result of price rises. ARPU for Comstar’s pay-TV services grew by 8%, however, as a low-cost package of channels was discontinued.
In Moscow, Comstar owner Sistema holds a 50% stake in MMDS operator Kosmos TV, with transmission company Russian TV and RTRS owning the other half. Sistema is looking to take full control of Kosmos TV at which point it will shift from MMDS to HFC cable distribution to allow for triple-play services. Kosmos TV has 50,000 digital subscribers in greater Moscow, offering 70 TV channels in 12 languages, with the basic package containing 42 channels. It is planning to add HD channels following the completion of trials.

Russia has seen huge growth in broadband subscriber numbers, raising the possibility of IPTV making considerable inroads in the pay-TV market. Numerous telcos offer IPTV and triple-play packages, and are ahead of much of the cable sector in terms of service offers.

By the end of the year, nearly 10 million people subscribed to broadband, an increase of 80% on the 5.14 million at end-2007. Moscow leads the way in terms of broadband penetration, standing at 62% at the end of 2008 but most future growth is expected to take place in the provinces.

Despite the uptake of broadband, a clear ISP leader has yet to emerge, although Comstar reported 1.2 million broadband subs at end-September 2009, up 32% year-on-year. The operator has almost total control of last mile connections to households in Moscow and has been working on upgrading them to fibre. This year, Comstar expects three quarters of its Moscow network to be able to receive broadband speeds of up to 24Mbps. 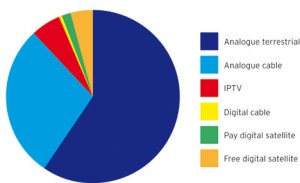 Comstar-owned Stream had 205,000 broadband subs at end-2008, with ARPU reaching RUB376 (compared with RUB123 for TV services). However, broadband ARPU is falling generally as competition increases.
Comstar launched IPTV services in May 2005, extending into Ukraine in 2008. By the end of September, it had 147,000 IPTV subs in Moscow and a further 150,000 in the regions. Residential broadband ARPU in Moscow was RUB319 during the third quarter of 2009, up 14% year-on-year.

The operator currently owns 25% of Russia’s largest telecommunications holding company Svyazinvest, which in turn owns a number of subsidiaries including Volga Telecom, which reported 900,000 broadband subs by the end of the first half of 2009. During that time it introduced unlimited tariff plans.

Another subsidiary, Central Telegraph, is developing a Universal Multi Service Network in Moscow under the QWERTY brand that already covers over 2.3 million apartments and since late 2006 has offered an IPTV service called QWERTY.TV. However, by the end of September 2009 it had attracted only 20,000 TV subs. Also owned by Svyazinvest, North-West Telecom (NWT) launched its IPTV service in April 2008 under the Avangard TV brand and had an estimated 4,100 IPTV subscribers by end-2008.  Southern Telecommunications, another Svyazinvest asset, launched an IPTV service in late 2005 under the DiSeL-TV brand. The service is available to all of its broadband subscribers in the Krasnodar Kray, Rostov and Stavropol regions as well as the Republic of Kabardino-Balkaria. It ended June 2008 with 234,900 broadband subscribers and 12,000 IPTV subs. Informa Telecoms & Media estimates that it had 17,000 IPTV subs by end-2008.

VimpelCom, which operates a number of subsidiaries including Corbina Telecom and Golden Telecom, ended the third quarter of 2009 with 937,000 fixed line broadband subs and a further 896 mobile broadband customers. It has been rolling out fibre-to-the-building and the network now passes over 7.9 million households, 800,000 of which use it. ARPU from fixed line broadband services reached RUB404 by the end of September.

Vimpelcom owns Ukrainian operators Ukrainian Radio Systems and Golden Telecom, both managed under the Beeline brand, which have jointly launched IPTV services in Kiev. Available as a trial in the city since June, the full 30-channel service is free to Beeline’s Internet At Home FTTB broadband customers; subscribers need to purchase a set-top box from the company. Beeline Ukraine will likely expand to other cities this year.

After several years of slow growth, DTH services have started to gain substantial momentum in Russia, where the terrain, dispersed population and multiple time-zones make the platform particularly efficient. However, persuading subscribers to part with their Rubles for pay-TV services remains a challenge.

The leading operator is NTV-Plus, with about 630,000 subscribers. It offers various services including HD channels and video-on-demand. However, despite having the highest ARPU of all the country’s pay-TV operators, NTV-Plus is likely to need upwards of one million subscribers to break even. In an attempt to build its subscriber base, the operator launched a low-cost package last September. Dubbed ‘Light’, it provides 34 channels covering a range of different genres for RUB99 a month. In addition to Russia’s national channels, the package includes some of NTV’s own channels, including a new sports channel, Sport Plus. International channels in the pack include Eurosport, Universal Channel, Euronews, Discovery, MTV, Jetix, Zone Reality and Fashion TV. Subscribers can upgrade to NTV’s basic and extended basic packages or take its premium thematic packages in addition to Light. The operator has also recently started offering pay-per-view football matches to viewers that have not subscribed to its Supersport package. The operator was the first to offer HD channels in 2007, launching with HD Kino and HD Sport. It has since added channels including Eurosport HD, Discovery HD, HD life and MTVNHD. 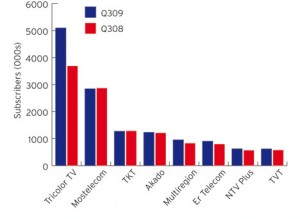 Russia’s leading DTH operator in terms of pure subscriber numbers is Tricolor TV, which ended the third quarter of 2009 with an estimated 5.1 million customers – up from just one million at the start of 2008. This might sound like a steep growth curve but is at least in part down to the fact that the operator offers free subscriptions for the first year and there is little evidence to suggest that many feel inclined to switch to a paid service – most prefer to receive the 13 free-to-air channels. It is worth noting that Gazprom-Media, which has interests in NTV-Plus, acquired a controlling stake in Tricolor TV last September. In a statement, it said the acquisition would allow it to expand its audience in the budget segment of the market. The combined audience of the satellite television services provided by Gazprom-Media would exceed six million subscribers. Gazprom-Media will keep the Tricolor TV brand, which will continue to provide a basic package of free channels but some premium channels currently provided by NTV-Plus are likely to be offered to Tricolor TV customers.

Another DTH service, Viva TV, operated by Orion Express, a subsidiary of Moscow-based Telecom Express, has not witnessed the same success as Tricolor. Since its July 2007 launch, the service has attracted approximately 100,000 subscribers. The service offers little more than the same free-to-air channels provided by Tricolor but at a cost of approximately ?36 for 12 months access, which is considerably lower than NTV-Plus.

Russian TV Time launched in May 2008 to target Russian expats in Europe and Israel. It launched with 17 Russian-language channels at a cost of ?9.99 per month. The operator gradually increased the number of channels available during 2009 and was targeting 60 by the end of the year.