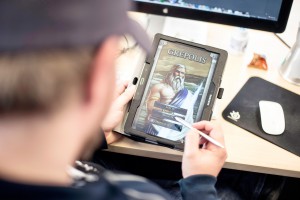 MTG has made a string of bold investments in recent times while selling off traditional TV assets. Arnd Benninghoff, the head of its digital division, MTGx, explains the strategy to Andy McDonald.

Nordic television company Modern Times Group is undergoing a period of change. The firm, which today describes itself as a digital entertainment group, has made a string of divestments in the traditional TV space and is putting its focus firmly on digital investments.

Speaking on the phone from Los Angeles, MTG executive vice-president and MTGx CEO Arnd Benninghoff explains the company’s strategy as it looks to both engage with young audiences and secure its place in a rapidly evolving entertainment landscape.

Since joining MTGx from ProSiebenSat.1 Media in 2014, Benninghoff says the division’s mission has been clear: “To become a digital leader for millennials”. To do this it has focused its investment strategy around three key verticals: multi-platform networks; eSports; and, most recently, online gaming.

“What I like about the three verticals [is] they’re all in different market cycles,” he says. “Multichannel networks were hyped two or three years ago. Now they are transitioning towards more IP ownership, with more focus on high-quality content,” says Benninghoff. “All [three] have the same importance for our digital transformation.”

Benninghoff claims that 25% of MTG’s total multiplatform network traffic is based on gaming content, making it a good fit with its other digital verticals. He describes eSports as a “super-hype” vertical that sits at the intersection of sports and entertainment, while taking an interest in gaming closes the circle by taking the customer direct to online games.

In 2016, MTGx bought a 35% stake in German online games developer and publisher, InnoGames, and earlier this year it said it may up this to 51% after selling its 50% shareholding in Czech free-to-air broadcaster Prima.

The Prima deal was just one of a long line of TV asset sales. In March MTG sold its free TV, pay TV and radio assets in the Baltic states for €115 million. In the past two years, the company has also sold off free and pay TV businesses in the Ukraine, Ghana, Tanzania, Russia and Hungary.

Benninghoff says that InnoGames appealed to MTGx for a number of reasons. Firstly, the company fitted its investment criteria by being in a “growing, attractive market with high margins”. He claims the 10-year old company has also grown effectively without expanding too fast or focusing all its efforts on a single flagship game. “They have a track record of launching successfully games,” he says. “It’s not a one-hit-wonder or a one-trick-pony, because they are running a portfolio of six games and are going to launch three more mobile-only games this year.”

InnoGames has offices in Hamburg and Dusseldorf, and offers a number of online, browser-based strategy games – including Forge of Empires, Elvenar, Tribal Wars and Grepolis. In 2016 the company increased its full year revenue by 25% to a record high of €130 million.

Asked whether MTG’s move away from free-to-air TV into games indicates this is where the company sees more value going forward, Benninghoff says that it is important to “follow eyeballs”. He claims that using TV divestment money to invest in “proven winners” in the gaming space is “definitely a good conversion of the cash”.

“We are in the storytelling business,” says Benninghoff. “Nowadays games tell the best story to me. That’s the reason why we believe in games as one of the strongest verticals. It’s a global market… It gives us a good future perspective of potential and we can apply our core competencies there, like storytelling and marketing, and we can target a separate [icitspot id=”686892″ template=”pull-quote”]audience.”

eSports is another huge growth area and MTG’s investments in this space have placed it firmly in the action. MTG owns a 74% stake in Cologne-based Turtle Entertainment, which operates the ESL brand and runs online leagues like ESL Pro League and events such as ESL One. It also fully owns Scandinavian eSports firm DreamHack, which runs a digital festival and has offices in Stockholm, Gothenburg, Copenhagen, Denver, Tacoma and Montreal.

“The huge advantage eSports has is it’s a truly digital and global sport, reaching the millennials – exactly the target group we are losing on free TV,” says Benninghoff. “If you look at the ratings of NFL, Formula 1, for this particular target group, you’re going to see a decline.” He describes the eSports demographic as an attractive target group for advertisers spending money today in traditional sports.

Intelligence company NewZoo estimates that eSports revenues will reach US$696 million this year – up 41.3% year-on-year – and will grow to US$1.5 billion by 2020 as brand investment doubles. To further tap this market, MTG launched eSportsTV, a linear TV channel, in 2015, in what Benninghoff describes as an experimental move that could widen eSports’ core audience.

“Imagine a scenario where the son sits with the father and explains eSports,” he says. “Suddenly you create a family experience. It’s about how can we broaden the experience through linear broadcasting.” While eSports’ young millennial audience may be more used to streaming this kind of content online, Benninghoff says the plan is to produce more background stories, documentaries, highlight shows and analysis to broadcast on TV. “There’s not one recipe for success for linear broadcasting,” he says. “What we want to add is more story-telling elements in this channel.”

MTGx’s growing interest in eSports has, in part, spurred it to put a person on the ground full time in West Coast America. In November MTG appointed former Digital Artists Entertainment boss Scott Rupp to develop the presence of MTGx in the US and work with DreamHack, ESL and the games companies there. Benninghoff explains that ESL has studio facilities in Burbank, California, MCN Zoomin.TV has a US footprint, and up to 30% of InnoGames’ revenues come from the US – “that’s why we want to be present here”.

Benninghoff describes MTGx’s business plan as a “buy-and-bid strategy”, but won’t speculate about when or if the digital arm could eventually become MTG’s main profit-driver. “Now we have great foundations,” he says. “But we don’t measure it by when we can make more profit than the core business. We are happy that we still have a functioning business model with free TV and pay TV. We benefit also from the synergies.”

With all this digital disruption, will MTG even be a ‘TV’ company in the traditional sense in ten year’s time? Benninhoff is not interested in using labels to define the business. “In the end we are going to stay in the same business of entertainment, storytelling – but it might change a bit,” he says.

“TV doesn’t go away; it’s an important foundation of our digital business. That’s the reason why these entrepreneurs in the gaming and eSports businesses pick us as a partner, because they know what we can contribute as a TV broadcaster: our experience in sports marketing, in TV production, in advertising, ad-sales and so-forth. It is a super-important part of our DNA and we don’t want to give up on this.”

“It’s really the combination and how you bring it to the next level and combine these assets so that 1+1 is 3, so it’s not like doing this, or that, or leaving the other business. I think the strength is a combination of these platforms and [our] storytelling experience.”

MTG’s bets in the digital space may seem bold, but the company is making necessary steps to evolve the business at a time of great change for the industry. As linear TV viewing continues to shrink, the TV platforms of tomorrow will have to be a different proposition from today – but how big an impact gaming and eSports will have on this brave new world is yet to be seen.