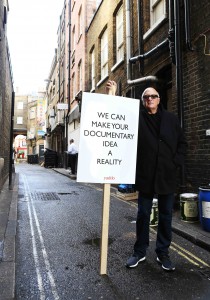 After 18 years at the helm of the BBC’s documentary strand Storyville, Nick Fraser is uniquely placed to lead Yaddo – a new subscription video-on-demand service dedicated to best that the documentary world has to offer.

Supported by tech partner and Swedish OTT TV specialist Magine, Yaddo is now live in Europe and will roll out to the rest of the world soon. The service is targeting a “global niche” of documentary enthusiasts with titles that can cross over and resonate around the world.

Speaking to Digital TV Europe, Fraser says that the site is “very intensively curated”. At launch the service includes around 60 titles, but the collection will build each month, with Yaddo also commissioning both shorts and feature-length docs to add to the mix.

“There’s no point in dumping huge numbers of documentaries on peoples’ laps, because you have to explain to people why the documentary’s any good and why they should watch them,” says Fraser.

As he sees it, part of the problem for documentary fans is finding good films in the first place. Even if a viewer knows the name of a particular title, tracking it down online is not always an easy task, or could lead to a bad or illegally posted copy on YouTube. Offering a path through this complexity is where Fraser’s encyclopaedic knowledge of docs, and Yaddo’s accessible £3.99 per-month pricing comes into play.

“I think the problem about the current distribution of documentaries is so completely random,” says Fraser. “I think our hunch is that at a low-cost, low-subscription [price], global [reach] you can make this sort of business model work.”

While competition in the SVOD space is getting fiercer by the day, Fraser believes that Yaddo offers something different. Netflix is pushing into big-budget, blue-chip nature docs, enlisting the creators of Planet Earth to work on its own Our Planet series, but Yaddo is not looking to compete here.

Nor is it going toe-to-toe with the likes of CuriostiyStream, the factual video-on-demand service from Discovery Channel founder John Hendricks, which is focused primarily on factual content about science, technology and human civilisation.

Instead it is seeking to carve a new niche and trying to fill a gap to cater to the what Fraser sees as a drop-off in documentary output from the established linear broadcasters.

“The way that people watch documentaries is changing rapidly. I think ­– not at the BBC, but elsewhere – there’s been a desertion of documentaries by broadcasters. David Elstein makes this point in his piece about Channel 4; Channel 4 are always talking about the documentaries that they show, and they don’t actually show very many,” says Fraser.

“We’re not in competition with Netflix or Amazon – it’s not what we do at all. We have very, very low overheads, very low costs and you know, our job is to find really good documentaries.”

On the content side, Fraser aims to offer forgotten and under-appreciated films alongside festival favourites, taking the view that doc fans, like book-lovers, will be just as interested in older titles as new releases. “There’s a whole large, large number of documentaries that came out and vanished and they’re great. It doesn’t matter that they’re five years old. If they’re 10 years old-plus they’re classics!”

Fraser says that an ideal Yaddo film is one that travels, appealing to western audiences despite not necessarily being made in the western World. He cites a 2015-aired Storyville film called The Chinese Mayor as a case in point – a title that he proclaims to be “a fucking masterpiece” and one that he has already licensed for the service.

“It’s about the mayor of the most polluted city in China who’s busy dynamiting half the city in order to turn the city into a UNESCO heritage site; it’s a comedy about the Chinese communist party in power. It came out on Storyville and did the rounds, but as far as most people are concerned, it’s a fresh film. It’s brilliant, and there’s quite a lot of films like that.”

Yaddo’s commissioning strategy will take a similarly open-minded approach, with budgets allocated by need, rather than as part of a rigid structure. The first feature length commission to appear on the service will be Oink – a film about the way that humans interact with pigs. The film is currently in production and Fraser admits he has wanted to it do for a long time.

“I think films about the relationship with humans and animals do well. People are interested in that now, there’s a sort of wave of interest,” says Fraser, citing films like Blackfish. He says Oink will tackle humans’ attitudes to pigs and tackle issues such as pig-to-human organ transplants and cultural mores relating their part in the food cycle. Like The Chinese Mayor, Fraser predicts the topic will travel.

On top of this, Yaddo has commissioned around 40 short docs, which Fraser says fall into two categories: films from different countries; and a series called Criminals.

The first will feature docs from as far afield as Japan, Brazil, South Africa and Poland and will explore unusual stories. For example, the English shorts in this series will span eccentric suburban taxidermists to female grime entrepreneurs. “The idea is there’s no normal left and everyone’s mad,” explains Fraser.

The Criminals series will feature people talking for five or six minutes about the crime they have committed, looking straight down the camera lens. Fraser describes it as a simple format that is “curiously riveting”.

For Fraser, Yaddo offers a new way for docs to be seen. However, he stops short of calling it “the solution” for documentary filmmakers. Rather, it presents another avenue for what can be a finically precarious profession. In an affectionate piece for the Observer earlier this year, Fraser summed up the lot of a doc maker by saying: “You won’t be rich, but you’ll have a good life.”

Yaddo came together after a lot of thought and a year and a half of raising startup funds. Fraser says that after so long at the BBC – an institution he loved “truly, madly, deeply” – he liked the idea of “doing new things”. However, Yaddo’s number one task now is to find its audience and to add subscribers. “It’s a dinghy in the Pacific syndrome,” says Fraser, describing the task at hand. But who better to have at the helm?