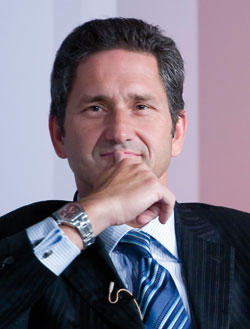 Digital TV Europe’s editorial team named Liberty Global’s Mike Fries as Industry Leader of the Year at our Euro 50 Awards last month (held at Cable Congress in Switzerland). Ahead of the show, he talked to Stuart Thomson about the company’s current plans.

Liberty Global has long stood at the forefront of European cable’s drive to establish itself as the leading consumer distribution platform for voice, video and data. For CEO and president Mike Fries, the industry’s future rests on the pillars of the rapid development of broadband, digital TV, and further consolidation. Fries says Liberty’s goal is be perceived as a provider of ‘quality’ – enabling it to differentiate on the basis of reliability and speed in broadband,  great content and enhanced services in TV.

Broadband is at the forefront of competition between fixed-line service providers. “I think today it’s very much about speed and the bundle,” says Fries. “The bundle is the product and, within that product, a high-quality fast broadband service that delivers everything it says it can deliver is the number one driver of value.”

While the battle for broadband remains primarily a matter of speed, competition for TV customers is increasingly focused on services including HDTV and DVRs. “We have nine million homes today that are still analogue. The reason we’re converting over a million of those homes each year to digital is that products like DVRs and HD are really killer apps,” says Fries. “When people receive an HD signal and when they start using the functionality of a DVR and see the benefits of clear signals and the variety and choice on digital platforms, there is no turning back.”

The next phase for Liberty Global is the launch of its next-generation platform, the combined set-top and home gateway dubbed Project Horizon. The device, which will combine an in-home wireless network, IP delivery of content to multiple devices and an advanced user interface with search and recommendation capability, will initially be aimed at premium subscribers. “We’re not going to abandon our existing digital platforms so initially it’s going to be a high-end product meaning that it will be an upgrade or available to new customers,” says Fries. “But over time, because the cost is reasonable and because the functionality is so compelling, it should be our basic platform.”

Investing in a high-end consumer premises device that is designed to complement the network capabilities of the operator is, says Fries, a strategy that makes perfect sense. The downward trend over time in the cost of consumer premises equipment means that operators can think about deploying new boxes without it having a deleterious impact on the bottom line. The box will launch in the Netherlands, with Switzerland and Germany to follow.

One of the major factors that has held the cable industry back from competing more effectively with the vast power of the major fixed-line telecom providers is the fragmented nature of the industry. For this reason, consolidation remains Liberty Global’s third major area of strategic focus.

“In our business scale is key. We want to do more of the things that we do really well and that means increasing our scale and scope in core markets,” says Fries. “Remember that we’re competing with very large nationwide telcos that can be anything from 10 to 20 times larger than the entire cable industry in any one country. We’re not naïve. To be competitive in our core markets we have to get bigger and have better reach in order to achieve the same kind of scale and efficiencies that our competitors have.”

Liberty Global has recently made significant acquisitions in Poland (where it acquired Aster) and Germany, where it acquired North-Rhine Westphalia and Hesse operator Unitymedia, and has been identified as a possible buyer of Kabel BW in neighbouring Baden-Württemberg. Fries is keen to point out that merger and acquisition activity has to meet the goals of regulators as well as the company’s own corporate ambitions. But on the regulatory front in general, he is praiseful of the recognition now accorded by European and national regulators to cable’s role in bridging the digital divide and helping the EU to meet its 2020 broadband objectives. Liberty Global, he points out, has almost achieved those goals within its own footprint already, a claim that telcos would struggle to match.

All things considered then, the European cable industry is in good shape to capture a significant share of the high-speed broadband market. And with over US$4.5 billion (?3.2 billion) in cash or near-cash equivalents available today to fund its expansion, Liberty Global is in good shape to capture a significant part of cable’s share. “We have credibility with and support from our shareholders and I don’t think our industry has ever been in better shape for access to the capital markets and credibility with investors,” says Fries.

“The reason we’re converting over a million of those homes each year to digital is that products like DVRs and HD
are really killer apps.”