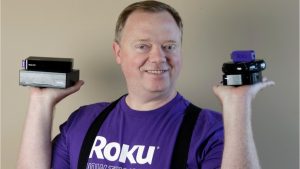 The coronavirus pandemic has seen a much-charted explosion in consumers subscribing to streaming services – Netflix added 10 million subscribers in the second quarter of the year alone, for example. But what has flown somewhat under the radar is the comparable rise in sales of streaming devices.

A report published this week by ABI Research found that Q1 had four million more units shipped by vendors like Google and Amazon versus the same period in 2019, while a separate study from Roku noted an acceleration of cord cutters in the US.

As evidenced by Netflix’s growth, the lockdown has driven consumers to the sofa as they attempt to remain entertained, and a number of high profile streaming services – such as HBO Max and Peacock – have seen the stars inadvertently align to boost their exposure at launch.

Dan Simmons, executive director of enterprise and residential communications technology at Omdia, believes that a combination of these launches and the lockdown has been instrumental to the growth of sales for streaming devices.

“It’s both really,” he says. “Stay-in-place orders dramatically increased OTT viewing in particular and streaming media devices are an easy way to do that.”

Both WarnerMedia’s HBO Max and Peacock are unavailable on Roku and Amazon Fire devices, but the analyst says: “If your existing devices don’t support a service you wish to access, purchasing a low cost streamer which does is an easy solution.”

And it’s true to say that these streaming devices are relatively inexpensive for the amount of content they open up to a broadband household.

Google has set an RRP of £30 for its entry level Chromecast device, while Amazon sells a UHD-enabled Fire Stick for £49.99. More high end models such as the Apple TV 4K or the Android TV-equipped Nvidia Shield TV are more expensive, but are still a pittance when set against the alternative of purchasing a 4K Blu-Ray player and curating a library of physical media.

This low cost is part of the reason why this section of the market has flourished by comparison to pricier ‘non-essential’ consumer products like TVs. ABI’s research identifying growth in streaming devices also found that major TV manufacturers reported nearly 18% year-over-year decline in shipments during the quarter, with a forecast worldwide total of 222 million flat-panel TVs to ship in 2020 – a year-over-year decline of 3%.

Simmons says that the fact that streaming sticks “are at least an order of magnitude less expensive than a TV, readily available online, and easy to return” makes them “a considerably lower risk domestic CAPEX investment than many other consumer devices.”

Such devices are also a much easier proposition for consumers to buy at home than many other tech purchases which demand a hands-on test. Companies like Amazon even send the product pre-logged in to the user’s Prime account, making the entire experience even more seamless. 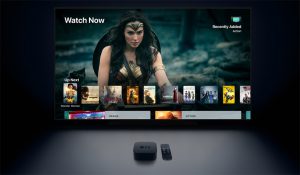 While streaming devices offer access to hundreds of premium and free, ad-supported video platforms, there exists a looming threat from pay TV operators who are looking to become super aggregators of content and smart TV manufacturers that are rolling many essential apps into a CTV operating system.

In terms of pay TV operators in the UK, we’ve seen Sky heavily integrate content from Netflix and Disney+ alongside its own shows and movies, while BT heavily markets its pay TV offer with the promise of effortless access to BT Sport, Sky Sports, Netflix and Amazon Prime Video.

TV makers like Samsung meanwhile offer access to all of these apps in addition to many more, plus Hybrid Broadcast Broadband TV (HbbTV) technology.

Simmons does not think that the increasing convergence of the above categories necessarily puts streaming devices at too much risk of elimination though.

The analyst says: “It doesn’t have to be a binary choice for most consumers and there’s room for all devices to exist. Streaming media devices are generally cheap enough that people can afford one as well as a smart TV and pay TV service. That’s what we see today and we’ll likely continue to see until pay TV fully transitions to OTT from broadcast.

“If pay TV STBs and smart TVs keep up to date with the latest major SVOD apps and broadcaster catch-up services then they will work brilliantly for the most consumers.”

The analyst adds that the focus of support and compatibility outside of just watching TV gives streaming devices an edge. “Pay TV STBs and smart TVs don’t play well with the wider smart device ecosystems. The streaming media devices integrate best with devices from those same ecosystems. If a consumer is at all interested in an Apple, Amazon or Google-centric smart home then the corresponding streaming media device from each vendor will be the best TV device for them.”

Another aspect of dedicated streaming devices which could see them have an edge for many users is the emergence of game streaming services. Sony and Microsoft have touted cloud technologies as integral to their upcoming generation of games consoles, but they will cost hundreds of pounds before a game is even bought.

Offerings like Google Stadia and Nvidia GeForce Now which can be accessed through streaming devices solely rely on a solid internet connection and, though they are in their relative infancy, have the potential to be a far greater value proposition. Simmons says that this will sway some users but that it “will ultimately depend very heavily on the success of those gaming services, which will need strong gaming content offerings.”

Streaming devices are in a positive position and their vendors seem set to reap the benefits for some time to come, but the nature of selling hardware is the absoluteness of the purchase.

In other words, Netflix will have made hundreds of pounds from each subscriber who has been using the service for years, but Google will only ever see £30 from the sale of a Chromecast, regardless of whether it’s in use for a month or a decade.

It is for this reason that Roku has been identified by MoffettNathanson analyst Michael Nathanson as a “streaming gatekeeper” while simultaneously being a less-than sure bet for investors.

The firm estimates that Roku devices are in “around 40% of US homes”, giving it an entirely enviable position – made clear by the consumer disgruntlement over an inability for the company to do deals with NBCUniversal and WarnerMedia.

However, while Roku is ubiquitous with streaming device sales, this is not where it makes most of its money. 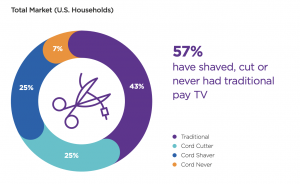 Figures on cord cutting from a recent report by Roku

Roku’s 2019 revenues reached US$1.1 billion, with its platforms unit accounting for 66% of that total. Within that, advertising made up 52% of the segment – a little more than US$377.5 million. In spite of this MoffettNathanson still has questions over how Roku will monetise its user base, leading it to only give the company a ‘neutral’ rating.

The purchase of advanced ad platform Dataxu in late 2019 looks to answer this question, with  Roku making it plainly clear that while device sales have put it on the map, ad revenue is what will keep it sustainable for the long-term.

This is a strategy which Simmons says is a solid one for the company to pursue. He says: “Roku doesn’t have ancillary devices and services and needs to monetise its subscriber base much more directly. Advertising has historically been a great model for this with television and Roku is wise to pursue this.”

This could inspire imitators, Simmons says. “I doubt it will be the only streaming media device vendor to do this. Service stacking has its limits. Consumers will only want to pay for so many OTT streaming services. Advertising is going to become a vital part of the OTT economy as more and more services launch.”

For the longer-term, a shift away from being solely dependent on device sales is required for vendors, but even for now Simmons believes that the gold rush is over.

“The major growth phase of the streaming media device market is over,” he says. “We’re now into a steady state, iterative phase of that market with longer times between new product launches and fewer significant innovations between product generations.”

Some may hope that the recent spike in sales would be an indication of the foreseeable future, but Simmons is matter-of-fact in stating that “I would expect things to fall back in line with forecast levels once the crisis is over.”

People will always purchase streaming devices – whether they’ve bought a new TV for a bedroom or as an inexpensive way to make sure their kids don’t get up to too much puckish behaviour at university – but in order for vendors to ensure they’re still around to sell them, companies must also look to other revenue-making opportunities in the inevitability that the well starts to dry up.