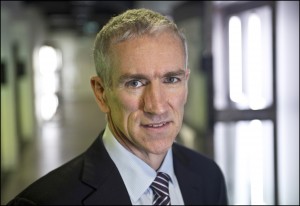 The triennial Premier League bidding season approaches. Since around 2006, it has been traditional at this time for stories to emerge that a scary, cash-rich bidder might swoop and take the rights from Sky. Sometimes, the stories feature a berated-as-irrational TV player, such as beIN Sports, but, often, the bogeyman is one plucked from a list of global web or tech players.

These stories are then quietly encouraged by those who would seek to talk up the price, whether Premier League executives, club chairmen or players’ agents. But the stories usually gain little traction and the claimed usurper never turns up.

So, it is no surprise that the stories have started, with YouTube initially in the frame. So far, so predictable. But then, with exquisite timing – at least if you are Richard Scudamore, boss of the Premier League – Amazon outbids Sky for a rumoured £50 million (€56 million) deal (£10 million per annum) for ATP tennis rights in the UK.

Meanwhile, Facebook is revealed as a US$600 million (€500 million) bidder (albeit unsuccessful) for digital IPL rights in India. So, do we have to take things more seriously this time? If tennis and cricket, why not football, and why not the big one? Perhaps, but there are plenty of arguments to say this is unlikely to happen.

First, it’s a very long way from the ATP World Tour (which does not include the grand slams) to the English Premier League: the financial gulf is huge – a 170-fold leap, from £10m to circa £1.7bn per annum; the complexity of the auction process is on another level, as BT has discovered; and the intensity with which the incumbents will defend is of a very different order.

Was Sky even defending the ATP rights fully? Ever since the 2015 Premier League auction, Sky has been trying to get its cost base back in shape. Was Sky, then, simply clearing the decks for the coming Premier League bid?

Sky Sports has never been overly keen on tennis; it dropped the US Open last year; and, perhaps, it judged that the recent era of Federer, Nadal, Djokovic and Murray will soon be at an end.

There is also a gulf between the two competitions as regards production responsibilities. With the ATP tour, someone else is responsible for production, with Amazon simply receiving and redistributing the central live feed(s) and perhaps not even bothering to wrap around a studio discussion. But bidding for the Premier League means stepping up to undertake primary production of live matches, given that the bar has been set very high. History tells us that the audience is very unforgiving if standards drop. Of course, Amazon could bring in external expertise, but that is a major undertaking, and not without brand risk.

Second, the global web titans tend to prefer a business model that they can replicate with a degree of consistency around the world.

Commissioning or producing their own comedies, dramas and documentaries fits the bill, because, if they bid enough, they can control the IP of the shows they make, so they can deploy the content in all territories. This means they have a broadly consistent proposition and brand story everywhere.

But sport does not fit so well. If Amazon, say, was to acquire Premier League rights in the UK, where does that leave its strategy in all the other countries in which it operates?

A full replication of the strategy would require La Liga rights in Spain, cricket in India, the NFL (at least) in the US, and so on. That sounds difficult to execute, especially when you only get to take the market by surprise once. And would you really signal your intent by picking up the ATP tour?

If Amazon was to succeed in such a series of auctions, the total bill for the primary sports right in each territory might be in the region of US$50 billion-US$100 billion per annum, a large figure even for Amazon.

More likely, it would fail in some places, leaving an inconsistent patchwork quilt, with analysts asking what was next. It would face constant challenge, being asked if its strategy was compromised where it still had gaps.

Third, could the UK (or global) web infrastructure cope? Streaming or downloading drama and movies over the web is one thing, because people watch at different times, but sport demands to be watched live. The strains on the core network would be more severe.

Beyond the core network, how many homes lack a local connection suitable for watching streamed sport? We are a long way from universal fibre availability in the UK. Does any web titan want to suffer the brand damage from denying access to the national game to those whose connection is not up to the task?

Fourth, do the web titans have the business model? I don’t buy the simplistic “they’ve got lots of money so they can afford it” type of analysis, because most bidders are answerable to rational shareholders and are working to a spreadsheet. The trick is to understand their spreadsheet.

At one level, sports bidding is very simple. The company with the best machine (that is, business model) for converting sports rights into revenue and contribution can rationally bid more and so should win the rights.

In years past, we saw that the pay TV business model drove more value than free-TV. As a result, the former could outbid the latter.

Subsequently, it became clear that pay TV platform economics beat those of a standalone pay TV channel. More recently, we learnt that triple play economics (including making an additional margin on connected products such as broadband), as enjoyed by Sky and BT, were essential to remain competitive in bidding for premium sports rights.

Now, the question is whether there exists a new machine or business model that can generate even more value and so support even higher bids – perhaps because football could drive the Netflix base further or help Amazon to drive Amazon Prime or generally take a greater share of the total retail wallet. That question is too big to analyse fully here but, suffice to say, I have my doubts.

Of more immediate interest, however, is how all of these questions are being analysed by Sky and BT. For the sake of simplicity, I refer in what follows to Sky and Amazon, but Amazon stands for itself and other tech giants.

Sky certainly knows these arguments and it might believe the odds are strongly against Amazon bidding.

Sky has three broad options. One is to disregard the risk in the first round and bid as normal. If it judges correctly, and Amazon does not show up, then all is well. If it has got things wrong and Amazon arrives with a large bid, then Sky will hope to get a chance to respond in a second round, but knows there is a risk that a second chance might not be offered.

Another option for Sky is to accept that the risk is too great to ignore and to bid aggressively in the first round, as if Amazon is certain to be there.

This presents many challenges: Sky’s knowledge of the Amazon business model is thin, so it is hard to estimate what Amazon could rationally bid. This scenario is probably odds-against, so Sky risks looking like a fool who jumps at shadows if Amazon doesn’t show up; and Sky might already be close to the limit of its rational bid envelope.

Neither path looks attractive. So, Sky may be tempted to go for the third option and hedge its bets, bidding somewhere in the middle. But this is a very bad idea, almost guaranteed to end in disappointment.

But maybe the focus should be on the dilemma for BT. If Amazon is attracted to a sport-lite strategy, consistent with picking up some tennis alongside its drama offering, perhaps a more consistent and likely move would be for it to seek to replace BT.

Remember, there are seven packs of live Premier League matches sold separately, with no bidder allowed to win more than five. BT has the two packs that Sky did not win. Rather than contesting the majority position with Sky, Amazon could try to pinch the minority position from BT (as BT once did to ESPN).

This possibility could be particularly bad news for BT. Before Amazon emerged as a threat, BT had the option of seeking a significant saving on its two Premier League packages. By stepping away from its previous efforts to contest the leadership position with Sky, BT could opt to bid less than Sky and still pick up the two packs that Sky would not be allowed to win.

If it judges that there is no one else to beat, there is potential for BT to save money on its sports costs while maintaining its current rights position.

It is, therefore, rather inconvenient that the Amazon story has emerged when it has: BT now has to decide whether it has no choice but to defend itself against the mere possibility of an Amazon attack.

How much risk will the incumbent rights holders take? Sky and BT, themselves, probably do not know yet. Based on my experience of defending the Premier League rights five times, I suspect that the final decision will be taken in the last days or even hours.

What is clear is that bidding for sports rights is as tricky as ever.

Arguably, there is no more stressful experience in UK television than submitting multi-billion-pound Premier League bids in the morning and then waiting for the phone to ring that afternoon.

Mike Darcey now works as a Media Strategy Advisor. He previously worked at Sky for 15 years, including six years as COO, and ran News International for three years.

RT @broadpeak: One in five respondents of @digitaltveurope 's 2020 survey believe that Video Quality of Experience has a greater impact on…
1st April 2020