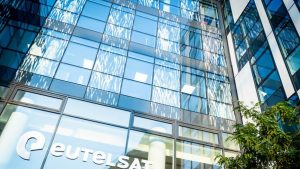 Satellite operator Eutelsat continued to see its broadcast revenues decline in its fiscal third quarter, in this case by 6.8% on a like-for-like basis to €182 million.

Data and professional video revenues also dropped by 2.7% like-for-like to €39.5 million in the three months to March, while government services revenues were also down.

Declines in these areas were partially offset by strong growth in Eutelsat’s relatively small fixed broadband and mobile connectivity lines, giving the operator a top line figure of €287 million, down 2.7% on a like-for-like basis.

The company said the decline in broadcast indicated an improving trend, with third quarter revenues broadly stable compared with the second quarter.

It said the decline reflected predominantly the effect of the partial renewal of capacity with Nilesat at 7/8°West, which is not offset by the resale of this capacity, and elsewhere, a slight erosion in the underlying business in Europe. Excluding the 7/8°West impact, Broadcast revenues experienced a low-single-digit decline.

Eutelsat confirmed its financial objectives for the full year but noted that this outlook assumed no material deterioration in revenues generated from Russian customers.

Eutelsat has come under criticism for continuing to operate in Russia in the face of that country waging war on Ukraine, particularly in light of its role in facilitating transmission of Russian TV channels.

“The third quarter saw robust delivery, with an improvement in broadcast trend and strong double-digit growth in both Fixed broadband and mobile connectivity whereas government services inevitably reflected the geopolitical environment in the Middle East,” said CEO Eva Berneke.

“Recent months have seen meaningful progress on the commercial front in particular with the successful commercialization of Eutelsat Quantum. Elsewhere, our global distribution agreement with OneWeb to address key connectivity verticals enhances the competitive position of both companies and represents a first step towards the development of combined GEO/LEO solutions. Overall, revenues at the nine month stage are in line with our expectations, and we confirm all our financial objectives.”