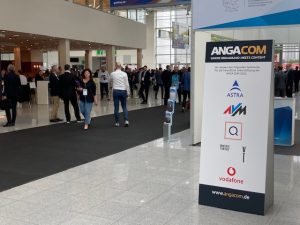 Germany is in danger of falling behind other advanced economies in the availability of high-speed Gigabit broadband, with a need for action by the Federal government as well as collaboration and firm commitments by telecom operators, according to a panel of service providers at the ANGA COM trade fair in Cologne this morning.

Srini Gopalan, management spokesman for Telekom Deutschland within Deutsche Telekom, speaking on the Digitisation Summit at ANGA COM, compared Germany unfavourably with countries such as Estonia, where he said that 99% of government activity had been digitised and people can buy houses online.

“Imagine if we were that digitised in Germany,” he said. “The basic prerequisite is to have a fast, reliable network.”

Current problems include too much regulatory oversight of public works, he said, noting that “whenever you dig up a street you need 21 different approvals” and adding that this would have to change.

On the other hand, Germany cannot force demand for ultrafast broadband. Gopalan said that the “consumer must be able to choose” which broadband technology to use and that it was up to operators to generate demand for high-speed networks.

In addition to regulation, Gopalan said that operators need to collaborate in order to limit the cost of investment and ensure that a return on it is possible

“We can create an open access network,” he said. “We believe in open access for all. If one company is responsible for the upgrade others must be able to access it.”

Gopalan said that co-layering of networks made sense in certain circumstances. He said that the operators had to collaborate, cut red

Thorsten Dirks, CEO of fibre operator Deutsche Glasfaser said that society faces multiple challenges that only be solved by digitisation and broadband networks. “We are falling behind in Germany. We intend to change that,” he said, welcoming the industry’s recent collective commitment to invest €50 billion in connectivity.

Dirks said that operators had to find new ways to lay networks more economically and needed to find a way to collaborate on a common infrastructure.

“We have to double down on investment. We need to have the right legal context and that is up to the government to do,” he said. “I’m glad to see that private investment has been prioritised by the new Federal government.”

Dirks said that the Federal government had to take a lead role in stripping out unnecessary regulatory obstacles and contributing to incentives to build out networks. He also said that the government has to practice what it preaches and ensure that strategy results in actions.

Andreas Laukenmann, managing director for residential customers at Vodafone Deutschland said that Vodafone is already a Gigabit leader in Germany via its HFC network. He said that the company already passed 24 million homes.

He said that Gigabit broadband was necessary in a fast time period and should be available at an affordable cost, and therefore that it made sense to sweat HFC networks rather than invest in full fibre in all circumstances.

Building out full fibre came at a cost that needs to be supported by a return, he said.

Laukenmann said competition between network providers was not necessarily a bad thing, but in new areas it made no sense to build rival nets.

Timo Von Lepel, managing director of NetCologne, the operator for ANGA COM’s home city, disagreed, arguing it was a problem that Germany had opted for interim technologies rather than going all the way to full fibre. “I would be happier to see Vodafone turn its HFC into full fibre and see migration from copper to fibre,” he said, observing “you can’t turn a VW Beetle into a Porsche”.

Von Lepel said that the situation in rural areas was “often worse” and “fibre more expensive”. In that context, having multiple networks is not a god idea, he said.

he said that NetCologne is already a big customer of Deutsche Telekom. However, he said, Telekom found it difficult to contemplate the prospect of having areas of the country where it does not have its own network, and it would have to partner with others in the future.

Laukenmann responded to the criticism of Vodafone by saying that HFC was available now and was capable of delivering Gigabit broadband. “HFC is not a Beetle but a turbocharged engine,” he said.