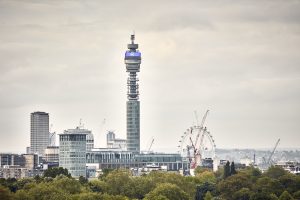 Cloud-based live video specialist M2A Media has teamed up with BT Media & Broadcast to bring what it claims to be the world’s first orchestrated cloud connectivity to BT Tower in London, Europe’s leading content exchange.

In a proof-of-concept trial, which tapped M2A Media’s cloud IP transport product, M2A Connect, and BT Media & Broadcast’s switching and outside broadcast capabilities and newly launched smart broadcast network Vena, test content was fed from BT Tower’s Broadcast Switch through its encoders and out across the internet using the SRT protocol with feeds ingested into the AWS Cloud.

From there, the feed was orchestrated using M2A Connect and routed across the AWS Cloud network to specific entitlement outputs and to device end points for confidence monitoring by both BT Media & Broadcast and M2A Media operations.

Along with testing M2A’s API Control, the trial enabled BT engineers to use the M2A Console and its scheduling capabilities, which allow for event-based orchestration of AWS Media Services that would otherwise need to be manually provisioned, according to M2A Media.

The company said the trial showed that the cloud can be an effective method of providing event-based, ‘bursty’ capacity into the BT Tower.

It said that the integration of cloud services into the BT Tower enables the expansion of BT Media & Broadcast services and demonstrates a transformation beyond traditional network only services.

Marcus Box, CEO and co-founder, M2A Media, said: “In an era when there is an insatiable appetite for content, providing broadcasters with a flexible method to access their rights is more important than ever before.  BT Tower is the central hub for distribution of content to UK and European broadcasters, so to have the opportunity to work with our friends at BT Media & Broadcast to see how M2A Connect can be integrated into this existing hub is hugely exciting.  Our collaboration with BT Media & Broadcast is driving change in broadcast technology.”

Faisal Mahomed, director, BT Media & Broadcast, said: “M2A Media is well known for its expertise in cloud video technology.  We’re seeing a growing demand from our customers for cloud media services, and our collaboration with the M2A team is allowing us to keep pace with this fast-moving market. We’re delighted with the results of this first trial, and we look forward to further developing these opportunities with M2A.”