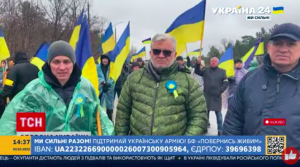 To make the channel’s content more accessible, TV3 Group has launched an English language live audio track, while also continuing work on Russian translation, which will be available starting today.

TV3 Group said it would provide most of the day-time content with translation and would aim to cover more hours after recruiting more interpreters.

Ukraina 24 is joint news channel of Ukraine’s biggest media groups and is currently one of the main sources of information about what is happening in the country. It is available on TV3 Group’s Go3, Home3 and TV3 Play platforms.

The group invited all local media companies to join this initiative by adding this channel to their cable and satellite platforms.

Ukraina24 is available via satellite on Astra 4A at 4.8° East;

On Monday UK media regulator Ofcom opened 15 separate new investigations into impartiality at the Russian state-owned international news channel RT, while the EU has already said it will ban RT and Sputnik, another Russian channel from broadcasting within its territory.

Today NATPE became the latest programming market to ban Russian companies from its Budapest event in June, following a similar move by RX, operator of the forthcoming MIPTV event in Cannes.