vMVPD on the rise in the US

The average US virtual pay TV user in 2021 used 13.5 video services per month compared to the average video household at 7.4 services.

According to new figures from Omdia, subscribers to virtual multiprogramming video distributors (vMVPD) represent 11% of all TV households as traditional pay TV subscriptions continue to decline.

Although virtual pay TV users are highly engaged, price hikes continue to push consumers to fully cut the cord and just rely on SVOD or AVOD services. Average monthly pricing for a vMVPD service in the US in 2021 was US$58.89 per month compared to US$99.44 for traditional pay TV and US$8.75 for SVOD. 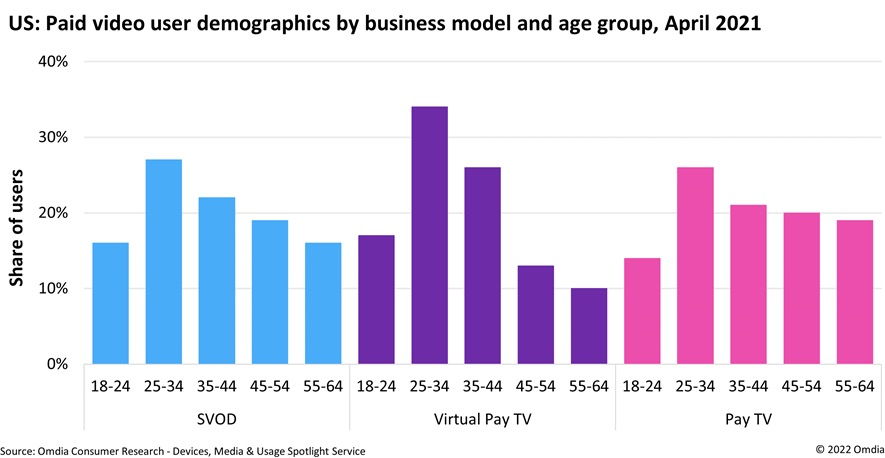 Sarah Henschel, principal analyst at Omdia, said: “Because virtual pay-TV services are internet-based and have no long-term contracts like traditional pay TV, user interfaces and experiences are received well and can adapt to changing customer needs.

“These users are more than twice as likely to use transactional video services (both retail and rental), with this growing to 3x as likely for premium video on demand (PVOD) and more than 5x for sport pay-per-view (PPV). Virtual pay-TV users are also almost 3x as likely to have pirated video content. This over-indexing highlights that these consumers are content-hungry and are able to find the content they need – through paid means or otherwise.”

Max Signorelli, senior analyst at Omdia, added: “US virtual pay TV users skew toward high income 25 to 44-year-old males with interest in TV shows and sports. Live sports is one of the driving growth factors behind virtual pay TV, but it is still niche in size compared to pay TV or SVOD. US virtual pay TV accounted for 7% of subscription revenue but only 3% of total subscriptions.”