MENA pay TV revenues to drop by US$1.5 billion

Pay TV revenues in the Middle East and North Africa (MENA) region are set for a steep decline in the coming years. 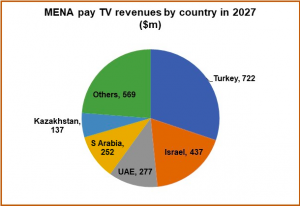 Subscriber numbers will also take a substantial hit, falling from 3.70 million to 3.14 million over the same period.

This is not the case in Turkey, where the number of pay TV subscribers will grow from 5.92 million in 2016 to 8.25 million in 2027. The country’s pay TV revenues however will still drop to US$722 million, with operators cutting subscription prices in order to curb cord-cutting.

One country where cord-cutting will be felt severely however is Israel, with 46% of its pay TV subscribers cancelling their pay TV memberships between 2014 to 2027 As such, revenues will fall from US$1.15 billion in 2014 to just US$437 million by 2027.

The UAE, Saudi Arabia and Kazakhstan will be placed as the third, fourth and fifth-largest pay TV markets in the region with respective revenues of US$277 million, US$252 million and US$137 million.

Simon Murray, principal analyst at Digital TV Research, said: “Pay TV has never had an easy ride in the MENA region. First was the battle with widespread piracy. Next the Saudi government and others banned beIN for four years. Traditional pay TV subscribers are now converting to SVOD platforms.”