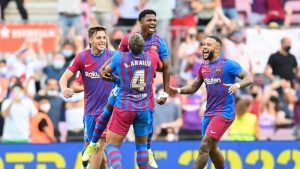 Spanish pay TV operator Movistar+ is reportedly in talks with sports streamer DAZN to gain the right to show all matches of LaLiga.

In news first reported by Lainformacion.com, the Telefónica-owned operator is seeking to secure the right to show the 45% of LaLiga matches to which it currently does not have access.

According to the reports, an agreement is most likely to cover the next season.

Under the conditions imposed on Telefónica at the time of its acquisition of DTS/Canal+ España in 2015, the operator is obliged to limit sports rights acquisitions to a period of three years. LaLiga’s decision to open bidding for five years means that the matter has been left in the hands of the Spanish competition authorities, who have yet to rule on the case.

Orange, which is currently airing matches to which Telefónica holds the rights under an agreement between the pair, is also reported to be seeking a deal with DAZN.

In other DAZN-related news, northern Spanish cable operator Euskaltel, now owned by number four nationwide player Másmóvil, has struck an agreement with the streamer to make its service available to its customers via its set-tops with integrated billing.

Euskaltel is offering free access to DAZN for three months to customers who sign up before the end of this month.